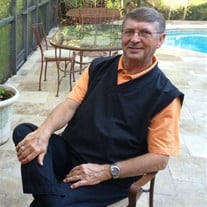 Obituary – William Lee “Bill” Gross On Monday, April 12, 2021, William Lee “Bill” Gross, proud husband, father of two children, two grandchildren, and one great-grandchild, passed away at age 76. Bill was born on November 9, 1944 in Washington, DC to Lee and Ruth Gross. He earned both his bachelor’s and master’s degrees from the University of Michigan and worked for AC Spark Plug (later Delphi) in Michigan until 2003. On May 7, 1965, he married Nancy Oakley. They raised a son, Mike, and a daughter, Debbie. Bill was active in the Lions Club and often coached baseball while his kids were in school. He was an avid and vocal fan of the Detroit Tigers, Michigan Football, and the Detroit Lions. He was steadfast in his cheering, and his belief that they all could win. He enjoyed trips to visit friends, loved American history, and made it to all 50 State Capitol Buildings with Nancy. He golfed at Pebble Beach, ran the Bobby Crim Road Race multiple times, played with baseball greats at Detroit Tiger Fantasy Camp, and more. Bill went to the Rose Bowl, The Masters, and the World Series. He was never shy with an opinion, and readily had a colorful story to tell! Bill was preceded in death by his father, Lee, and his mother, Ruth. He is survived by his wife Nancy, his two children, Mike (spouse Sharon) and Debbie (spouse Michael), his sister Connie (spouse Brad), grandchildren Meagan and Dylan (spouse Laura), great-grandson Keegan, Sally Voakes (sister in law), numerous cousins and Jan Gross. A small (limited due to COVID protocols) funeral service will be held on Trinity Memorial Gardens on Monday, April 19, 2021 at 1 o’clock p.m. It will also be streamed live at the link below. In lieu of flowers, please consider making a donation to the National Spasmodic Dysphonia Association (https://dysphonia.org/) as Bill suffered from this rare, chronic, voice disorder since 1986. Link to live stream: https://view.oneroomstreaming.com/authorise.php?k=1618380051560043

The family of William Lee Gross created this Life Tributes page to make it easy to share your memories.

Send flowers to the Gross family.