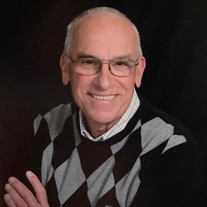 Willi P. Kreuzer, 79, of Trinity Florida, passed away on Sunday July 18th, after a heartbreaking 9 month battle from complications due to Myelodysplastic Syndrome and Acute Myeloid Leukemia. Willi was born February 1942 in Mannheim, Germany to the late Philipp and Lydia(Hotter) Kreuzer. He came to the US when he was just 19 years old, and met his bride Gloria(Burington) at the local German club in Syracuse. Willi was a lifelong resident of Syracuse, NY before moving to Florida almost 3 years ago. He earned his Associates Degree from Onondaga Community College, in Mechanical Drawing and CADD. He worked as a machinist, then programmer at Carrier Corp from 1972 until he retired in 1999. He was a member of the German-American Society of CNY for many years and was the president of the club for 3 years up until he moved. He was also a member of the Moose Lodge and a frequent blood donor. Willi was a lifelong parishioner at Most Holy Rosary Church, where he and Gloria met many of their friends over the years while attending the parish. They renewed their 50th wedding anniversary vows there in April 2013. He and Gloria traveled every year to see his family back in Germany, including his beloved sister Ursula(Karlheinz). Willi was such a devoted, caring, and compassionate husband, Dad and Opa. His life since retirement was filled with quality time spent with his extended family. Willi loved to cook, and you were indeed lucky to have tasted his German potato salad, or his Linzer torte. He was a semi-pro soccer player in his youth, continued playing into his 60s, and upon retirement took up golf and ping-pong. He loved to read, and he was known for singing loud enough for the neighbors to hear. But his favorite was owning the dance floor with Gloria, at many weddings, parties and even throughout their home. He was fun, energetic, silly and his one liners always caught you by surprise. His strength was inspiring, and remarkable, and he showed us that until the very end. Willi was predeceased by his mother Lydia(Fred) Urech, father Phillipp Kreuzer and brother in law Karlheinz Koch. He is survived by his wife of 58 years Gloria(Burington) Kreuzer; sister Ursula(Kreuzer) Koch of Germany; children Michael(Denise) Kreuzer, Deanna(Thomas) Dussing, Kelly(Christopher) Godlewski, Christopher(Kolette) Kreuzer; grandchildren Derek(Elaine), Tanner(Dia), Stephanie(Joseph), Julie, Jessica, Alyssa, Hannah, Molly, Benjamin and Alex. Services will be determined at a later date. In lieu of flowers, please make donations to either the MDS Foundation or the Leukemia & Lymphoma Society. Both of these groups helped us in our time of need.

The family of Willi P. Kreuzer created this Life Tributes page to make it easy to share your memories.

Willi P. Kreuzer, 79, of Trinity Florida, passed away on Sunday...

Send flowers to the Kreuzer family.