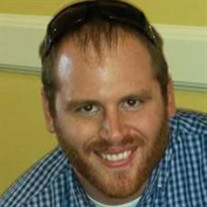 Scott Ian Abrams, 31, of Land O Lakes, FL passed away at home on Tuesday, September 7th, surrounded by his family after a long, hard-fought, battle with cancer. Scott was born on November 8, 1989, in New York. Before moving to Florida at the age of four with his family, he lived in Levittown, New York. As a child, Scott loved all sports. He played baseball, soccer, and football. He attended Lake Weir High School in Ocala and was an offensive lineman for the Lake Weir Hurricanes. His teammates were inspired by his hard work and dedication to the sport. Scott then decided to join the wrestling team on a whim after being approached by the team’s coach. During his wrestling career, Scott was the county, district, and regional heavyweight champion. He also qualified for states twice, finishing in the top 10 in his senior year. He inspired not only his teammates, but wrestlers from competing teams. After graduating from Lake Weir in 2008, Scott was offered a scholarship to play football for Concordia University in Chicago. Through his dedication and sportsmanship, Scott continued to bring out the best in his teammates while having fun. Upon returning home to Florida, Scott was hired at Spectrum as a technician and worked his way up to a Field Operations Supervisor. During his tenure, Scott became the go to guy and motivated his team to exceed their goals. Scott truly enjoyed working and helping others. Scott cared about everyone and put their needs before his own. He was loving, kind, and probably one of the funniest people we all know. Many have said it was a privilege to have him in their lives. Scott will be remembered as a devoted son, brother, uncle, nephew, cousin, and friend to many. Scott is survived by his father and mother Alan and Lorraine Abrams, his brother-in-law and sister Ronnie and Amanda Swift, very special niece Harper Swift, and many aunts, uncles, and cousins. Scott’s final resting place will be at Trinity Memorial Gardens where all are welcome to visit, reminisce, and spend time with him.

Scott Ian Abrams, 31, of Land O Lakes, FL passed away at home on Tuesday, September 7th, surrounded by his family after a long, hard-fought, battle with cancer. Scott was born on November 8, 1989, in New York. Before moving to Florida at... View Obituary & Service Information

The family of Scott Abrams created this Life Tributes page to make it easy to share your memories.

Send flowers to the Abrams family.