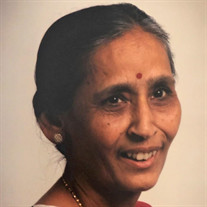 To view the livestreaming service please click the link:https://www.oneroomstreaming.com/view/authorise.php?k=1611120959481664 Mrs. Kamalaben Chunibhai Patel April 1, 1933 – January 19, 2021 Our beloved Kamuba was born in Kaloli, Gujarat India. She had very fond childhood memories of growing up with her older brother the late Gordhanbhai. At the age of 24, she married our Chunidada and instantly became a mother of six. Within a few weeks of starting her married life, she moved with her new family to Baduda, a small village in a remote part of Uganda, East Africa. There they were blessed with three more children. Early life in Uganda was financially and culturally difficult but she adapted quickly. She learned the basics of the local language and culture from neighbors and friends. She started her own home-based catering business so that she could support her husband in making sure that the children got a good education. In this way, even though she had basic schooling, she was highly educated through life skills. In the absence of local options for higher education, they sent some of the children to boarding school in India. The family moved back to India in 1969 due to the political situation in Uganda. Even in India, she quickly put her newly acquired business skills to good use to help support the family. Over time, their eldest son moved to the United States while the others moved to London, England. Eventually, she and Chunidada moved initially to London in 1977 and then to the United States in 1999. She suffered a major loss when Chunidada passed away in 2010 after 52 years of marriage. She was a strong willed woman and even beat stage 4 ovarian cancer in 1992. Her true character was seen by all in the way she took loving care of her husband while he battled chronic asthma. Kamuba passed away peacefully at home in Tampa in the presence of family. Her 9 children are the late Vimuben (Chimanlal), Kiranbhai (Pam), Hasmukhbhai (Ramilaben), Arvindbhai (Varshaben), Rameshbhai (Rashmiben), Rajnibhai (Dharmistaben), Jyotsna (Dilipkumar), Dinesh (Parul), and Minaxi (Chandreshkumar). Her 24 grandchildren are Mukesh, Jayesh, Milan, Nehal, Sonal, Sejal, Kapil, Rishi, Preeti, Malvi, Chirag, Purvi, Rahul, Punam, Rajiv, Priya, Delaura, Jagat, Aakash, Jyodi, Shivani, Suhani, Chandni and Kishori. She is also survived by 21 great-grandchildren. Jai Shri Krishna

The family of Kamlaben Patel created this Life Tributes page to make it easy to share your memories.

To view the livestreaming service please click the link:https://www.oneroomstreaming.com/view/authorise.php?k=1611120959481664...

Send flowers to the Patel family.