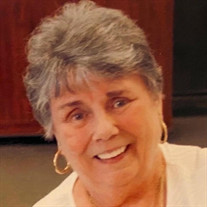 June Theresie Aboussleman, age 79, passed away peacefully with her son at her side on August 22nd 2021. June was born on March 20 1942 to Siguard and Lilly Holm. She was a graduate of Fort Hamilton High School in Brooklyn, NY but not before meeting the love of her life, Donald Aboussleman. The high school sweethearts met and started dating when she was just 14 years old. Don and June went on to get married on Valentines day 1959. Their first son Wayne Aboussleman was born a short 10 months later on December 27 1959. She went on to have another son, Guy Aboussleman, a new years baby, born January 1st 1961. In the Summer of 1963, the whole family moved from New York to California for Don to pursue a career in Law enforcement. Don and June later moved to upstate New York when she took a job transfer with Kodak. June worked as a secretary for Kodak and retired after more than 25 years of service. They lived in Fairport New York before taking another transfer down to St. Petersburg Florida. It wasn’t long after that June accepted an early retirement and they made Florida their permanent home. June quickly learned the game of Mahjongg and could be found playing as many as 4 nights a week. She met friends she would later call family. To June, family was everything. She loved receiving hand written notes, phone calls and even better, visits from her grandchildren. She was a loving grandmother to 5 grandchildren and 12 great grandchildren. June was preceded in death by her parents Siguard and Lilly Holm, her son Wayne Aboussleman, and her husband of 61 years Donald Aboussleman. She was survived by her son Guy Aboussleman, Granddaughters, Julie Hilfiker, Nicole Call and Tracie Aboussleman. Grandsons, Wayne and Timothy Aboussleman. 12 great-grandchildren; Aimee, Allison, Samantha, Aurora, June, Benjamin, Kaizen, Wyatt, Mollirose, Margot, Akari, and Crosby. Funeral Services will be held for both Donald and June Aboussleman on September 18th 2021 at Trinity Memorial Gardens. Visitation from 11 am - 1 pm followed by a service from 1 pm to 2 pm.

June Theresie Aboussleman, age 79, passed away peacefully with her son at her side on August 22nd 2021. June was born on March 20 1942 to Siguard and Lilly Holm. She was a graduate of Fort Hamilton High School in Brooklyn, NY but not before... View Obituary & Service Information

The family of June Aboussleman created this Life Tributes page to make it easy to share your memories.

Send flowers to the Aboussleman family.