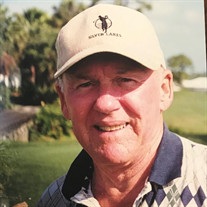 Palm Harbor - John J Feenick, known to his friends and family as “Jack”, passed away peacefully on October 16, 2020 at the age of 93. Jack was a loving resident of HarborChase of Palm Harbor Florida. He is predecesed by his parents and loving wife, Bobbie, of 64 years. He will be forever remembered by his loving family including his daughter Mary Mansour (George), and sons John (Susan), and Jim (Kate). He leaves behind four cherished grandsons Nathan Mansour, Andrew Boyle, and Ryan & Jack Feenick. Jack was born to parents Francis (Frank) and Mary (Mae) Feenick of Wilkes-Barre, Pennsylvania in 1927. After serving overseas in both the US Army and Navy during WWII and the Korean Wars, Jack graduated from Penn State University. In 1955, he married Barbara Lewis (Bobbie), first living in Teaneck NJ, and then setteling in Bainbridge, a small town in Upstate New York where they raised their three children. Jack was the business administrator for the school system handling budget and other financial issues. He was very active in the Chamber of Commerce and Rotary Club, serving a term as President, and was a co-founder of the 70-mile General Clinton Canoe Regatta in 1963, which became a premier annual event in the sport of canoe racing and charity event for the local economy. Jack enjoyed played tennis, and with Bobbie, shared a love for golf. They first retired to Ocean City Maryland and later became full time residents in Florida. For many years they were active in the community at Heritage Springs in Trinity, Florida. Jack, who valued his Irish ancestry, was quick to make new friends and enjoyed following sports of all types. Jack & Bobbie enjoyed travel and summer trips to western North Carolina where they enjoyed the mountains and attending cultural events including the Brevard music festival. Memorial gifts may be made to Suncoast Hospice, 164 W. Lake Rd. Palm Harbor, FL 34684, suncoasthospice.org. His family would like to recognize the exceptional care received by Hospice and the loving staff of HarborChase Palm Harbor. A Mass of Christian Burial will be celebrated at Espiritu Santo Catholic Church in the Spring of 2021.

Palm Harbor - John J Feenick, known to his friends and family as &#8220;Jack&#8221;, passed away peacefully on October 16, 2020 at the age of 93. Jack was a loving resident of HarborChase of Palm Harbor Florida. He is predecesed by his parents... View Obituary & Service Information

The family of John J Feenick created this Life Tributes page to make it easy to share your memories.

Send flowers to the Feenick family.