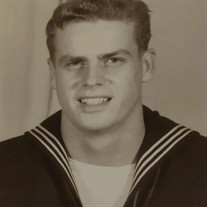 John (Jack) Andrew Bennett, Sr. passed away peacefully on Saturday evening, October 23, 2021 at 6:15 PM in Largo, Florida. Jack was born in Scranton, Pennsylvania on March 9, 1934, and baptized into the Roman Catholic Church on April 8, 1934. He completed his sacraments of Holy Communion, Holy Confirmation, and then Holy Matrimony to Eileen Suth on August 19, 1961 at St. Thomas the Apostle Church in Bloomfield, New Jersey. He lived a robust 87-year old highly active life and was a Navy veteran (1951-55) serving in the Korean War on the USS Francis M. Robinson Naval Destroyer (EDE-220). He was a classified communications expert and joined the Navy before formally graduating from his secondary schooling in Newark, New Jersey. After being stationed in Key West originally, Jack loved Florida and spent his recent years in Largo with companion Bonnie Mason, who he met in Tombstone, Arizona, where they were a member of Sacred Heart Catholic Church and shared a joint love for travel and the great outdoors. After his honorable discharge from the US Navy and attending Fairleigh Dickinson University, Jack became an aerospace (test) engineer in Little Falls, New Jersey at Singer-Kearfott Guidance and Navigation Corporation and then in Clearwater, Florida at Honeywell Aerospace. He had a giving heart to many friends and strangers, and loved recreational and organized baseball, softball, football, and pub sports - particularly playing darts. He was also an avid and novice musician - playing the “spoons” for anyone in listening range with an adult beverage. Jack is preceded in his final sacrament by his late, loving and ‘staunch’ Roman Catholic parents, James (Sr.) and Alice; his late siblings, Jeanne, James, Jr. (Jimmy), Mildred (Dit), and Fran, and his first and late wife, Eileen. He is survived by his three children, John (Jr.), Timothy, and Kelly; grandchildren - Olivia, Zoe, Zane, and Zeta; and great grandchildren - Lincoln, Jackson, and Liam. Jack’s favorite pet was his pedigree Chihuahua dog, named Tequila, who he cherished from 1998-2005. A funeral mass will be privately held in Trinity, Florida in December and Jack will be laid to rest in our Lord at the Florida National Cemetery in Bushnell. This final rest will exemplify his faith and service to the United States of America, Department of the Navy, as a Korean War Veteran and his commitment to our ongoing dedication to freedom and our loving and merciful God. The family requests that in lieu of flowers please consider a donation to either a charity that supports veterans and/or Catholic Charities in Jack’s honor of his service to our Country and his commitment to a Catholic-Christian faith and fellowship to serve all of humanity.

The family of John Andrew Bennett Sr. created this Life Tributes page to make it easy to share your memories.

Send flowers to the Bennett family.