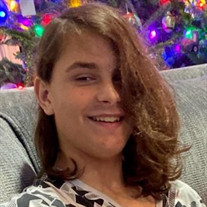 Jayden (Jay) Alexander Relyea, 14, of New Port Richey, passed away on March 10, 2020. Born on May 18th, 2005 at St. Joseph’s hospital in Syracuse, NY, Jayden spent his first seven years living with his parents and brother in the Cicero/North Syracuse, NY area. He was blessed with lots of family - grandmothers, grandfathers, aunts and uncles who frequently went to watch “Jayden the Jet” zoom up and down the soccer field. In his early years, he had a crazy love of trains, planes, rides on ATV’s with his aunt & uncle, and drawing dinosaurs. When his family moved to New Port Richey in 2013, Jayden attended Cypress Elementary, then River Ridge Middle and was a freshman this year at River Ridge High school. In his free time, he spent hours & hours on the computer playing games, building his own gaming computer and making YouTube gaming videos. He is survived by his father and mother, Ron & Karen Relyea, his brother, Maximus Relyea, his grandfather, Ron Relyea Sr., his uncle Nick Myers (Harry Myers), and aunts, Andrea Relyea (Lucy Relyea), Shelly Relyea (Brian Battle), Rich Wright and Katherine Myrick (Richard Cope). Calling hours & funeral services will be held Saturday, March 14th from 11-3pm at Trinity Memorial Gardens, 12609 Memorial Drive, Trinity. A celebration of life event will take place following the services beginning at 4pm at 9019 Creedmoor Lane, New Port Richey. In lieu of flowers, the family asks that a contribution be made to a charity of the donor’s choice in remembrance of Jayden.

Jayden (Jay) Alexander Relyea, 14, of New Port Richey, passed away on March 10, 2020. Born on May 18th, 2005 at St. Joseph&#8217;s hospital in Syracuse, NY, Jayden spent his first seven years living with his parents and brother in the Cicero/North... View Obituary & Service Information

The family of Jayden Relyea created this Life Tributes page to make it easy to share your memories.

Send flowers to the Relyea family.