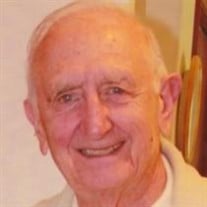 Guy S. Alfano, M.D.,of Hudson, FL, was born on January 30, 1928, and passed away on April 8, 2020. He was preceded in death by his parents, four sisters, and his wife of 50 years, Mary Jane Alfano. He is survived by his brother, Dr. Gaspare Alfano, his wife, Elizabeth Dittman Alfano, and his four children, Susan (Chris) Cotronei, Dr. David (Stephenie) Alfano, Donna (David) Littleton, and Amy (Scott) Davis; plus 8 grandchildren, and 11 great grandchildren. Due to present conditions for the coronavirus, there will not be a funeral service at this time. ************************************************************************** Dr. Guy Alfano was born and raised in Buffalo, N.Y., the son of Sicilian immigrants, Angelo and Josephine Alfano. After graduating from the University of Buffalo Medical School, Dr. Alfano embarked on the start of his practice in general surgery. During his 25 years of active practice, Dr. Alfano was recognized as one of the preeminent surgeons in the Buffalo area. After 25 years of performing surgery, Dr. Alfano left his practice to oversee, as its medical director, the transition of the Meyer Memorial Hospital into the present day Erie County Medical Center. He was as highly respected as an administrator as he was a surgeon. Several years later Dr. Alfano would move to New York City to become the medical director of the Cabrini Medical Center in Manhattan. After semi-retiring to Bayonet Point, Florida, Dr. Alfano returned to his roots by once again practicing surgery in the Army Reserves at MacDill Air Force Base in Tampa, Florida. He practiced surgery there for several years, even being called up to active duty during Operation Desert Storm. He retired at the rank of Full Colonel. Not ever one to just watch life pass by, after finally fully retiring, Guy continued to contribute his various skills wherever there was a need. He volunteered for 25 years for V.I.T.A., a program of the IRS, that assisted tax payers in doing their income tax returns. In addition, he served as a guardian ad litem, a volunteer child advocate, to protect abused, neglected, and abandoned children. He also helped start the Hernando Pasco Hospice organization, and served several years as President, and on the Board of Directors. He was a member of the Beacon Woods Golf Club for over 35 years, and missed his last short putt, in June 2019, at the age of 91. While Guy Alfano was respected by those he cared for as patients, and worked with throughout his life, he was loved most by his family, whom he never stopped providing for, and watching over.

The family of Dr. Guy S. Alfano created this Life Tributes page to make it easy to share your memories.

Send flowers to the Alfano family.