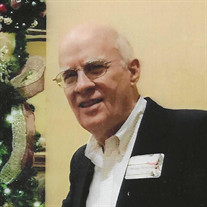 Flemming, George Fairclough, 78, of Tampa, passed away peacefully on February 12, 2022 at St. Joseph’s Hospital in Lutz, Florida. George was born on June 15,1943 in Milwaukee, Wisconsin. He is the son of the late Harold and Edith Flemming. When he was two years old, his family moved to the Orlando, Florida area & he grew up there, graduating from Edgewater High School. Shortly after graduation, he joined the Air Force. He served in the Photo Mapping Unit in Papua New Guinea and Ethiopia. While stationed in Montgomery, he met Nancy. They were married on November 16, 1963, and settled in Montgomery, AL. After leaving the service, he attended University of Alabama, graduating with a bachelor’s degree in business from Troy University. He started a 37-year career with IBM, that took him to Endicott, NY; Raleigh, NC; New York City; Washington, DC & Tampa, where he continued to live for 40 years. He was known for his quick wit, his infectious smile, and his kind, compassionate & outgoing spirit. He was passionate about his work with IBM, enjoying many friendships with his coworkers. George was an active member of Lake Magdalene UMC, then later Bay Hope UMC. He was also involved in men’s ministry at Grace Family Church. His faith was important to him and grew stronger in his later years. He was an avid sports fan, loving all the professional Tampa teams, as well as USF, but his favorite was University of Alabama football. He was known as “Coach” from many of his son’s teams, and active in cheering his kid’s and grandchildren’s activities. He was a competitive water skier in his teen years, even appearing at Cypress Gardens, and continued to love boating with his family. He also loved sports cars & racing, attending many events. George loved to travel. His favorite place was the beach, particularly Indian Rocks Beach, as well as the mountains of North Carolina and Hawaii. A member of the American Legion of Odessa after retirement and supporter of Wounded Warriors Project. The family would like to thank the doctors, nurses, and caregivers that cared for George in his last years. He was a beloved husband, father, and grandfather, always putting his family first. George is survived by his loving wife of 58 years, Nancy Flemming; children, Dawn Lovo, Jeff Flemming (Michelle), Chris Flemming, and Amy Manning (Chris), all of Tampa; grandchildren, TJ Lovo, Seth Lovo, Chase Flemming, Bryce Flemming, Braden Manning and Kaitlyn Manning; siblings, twin brother Ned Flemming (Lori) of Amelia Island; many nephews and nieces, and his devoted dog Layla. Preceded in death by his parents, and sister Sandra Little. A visitation is to be held for George on Thursday, March 3, 2022 from 5:00 until 7:00 PM at Trinity Memorial Gardens, located at 12609 Memorial Drive, Trinity, FL 34655. A gathering of family and friends will be held on Friday, March 4 at 12:30 PM at Bay Hope Church, located at 17030 Lakeshore Rd, Lutz, FL 33558; a Celebration of Life is to follow at 1:00 PM at Bay Hope Church. Military honors and interment will be taking place on Friday at 2:25 PM at Trinity Memorial Gardens Cemetery. His family asks that you consider donations to the Alzheimer’s Association or Wounded Warriors Project in his honor.

Flemming, George Fairclough, 78, of Tampa, passed away peacefully on February 12, 2022 at St. Joseph&#8217;s Hospital in Lutz, Florida. George was born on June 15,1943 in Milwaukee, Wisconsin. He is the son of the late Harold and Edith Flemming. When... View Obituary & Service Information

The family of George Fairclough Flemming created this Life Tributes page to make it easy to share your memories.

Send flowers to the Flemming family.