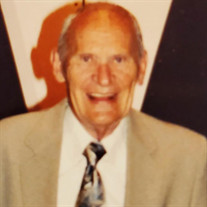 Ed passed away on October 3rd peacefully while napping after breakfast at age 91. He was born the third of four children on October 29, 1928 in Milwaukee, Wisconsin to Martha Perszyk and Edward X. Potrykus Sr. Ed spent his childhood living on a farm in Peewaukee, Wisconsin, and remained a serious Green Bay Packers fan until his passing. He attended the University of Wisconsin and was a veteran, having served in the Army Airbourne during the Korean War. He later moved to New England where he met and married Christine Smith of Weymouth, Massachusetts in 1967. Ed spent the majority of his career as an executive in the insurance industry at The Hartford in Hartford, Connecticut, while residing in Vernon. Upon retirement from The Hartford in 1984, he relocated with his family to Palm Harbor and later moved to Trinity in 1999. Although "retired", Ed worked part-time for Publix Chelsea Place well into his eighties where he was better known as "Mr. Ed". He was involved in too many civic groups, community clubs and charitable organizations over the years to mention. Ed made a friend of everyone he met and was a most generous spirit. Besides the Packers, he loved hockey, boxing, photography, journalism, traveling, chess, bridge, gambling, Manhattans and most of all, his dog. He was Catholic. He leaves behind his daughter Kim Hamm, three grandchildren Nicholas Hamm, David Hamm and Tori Hamm, all of New Port Richey, his sister, Gloria Potrykus of Racine, Wisconsin, his sister-in-law Marilyn Potrykus of Kingston, Massachusetts, and many, many beloved nieces and nephews and their families. He was preceded in death by his wife Christine, his bother Clarence Potrykus, and his sister Bernadine Wilinski. He will be laid to rest on Thursday, October 29th at 1pm with military honors. In lieu of flowers, donations may be made to SPCA Suncoast of New Port Richey, Florida.

Ed passed away on October 3rd peacefully while napping after breakfast at age 91. He was born the third of four children on October 29, 1928 in Milwaukee, Wisconsin to Martha Perszyk and Edward X. Potrykus Sr. Ed spent his childhood living on... View Obituary & Service Information

The family of Edward Potrykus created this Life Tributes page to make it easy to share your memories.

Ed passed away on October 3rd peacefully while napping after...

Send flowers to the Potrykus family.