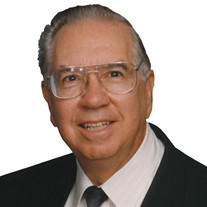 Benjamin Joseph Mancine, beloved husband, father, and grandfather, passed away of natural causes on March 20, 2020, at St. Joseph’s Hospital North in Tampa, Florida. He was 88 years old. Born in Cleveland, Ohio, Ben attended Collinwood High School where he was president of the student council, worked at Euclid Beach Park, and led a five-piece band, The Melodiers. He earned his bachelor’s degree in biology at John Carroll University in Cleveland, graduating Cum Laude and a commissioned officer in the U.S. Army. Ben married the love of his life, Evelyn Roberts, on November 26, 1953. Immediately following the wedding, Benjamin served his country as a Lieutenant in the United States Army during the Korean Conflict. Upon returning home from Libya, Ben began raising a family and started a long career teaching biology at Collinwood High School. He soon earned a master’s degree in Administration at John Carroll University. He later served as Guidance Counselor, Assistant Principal, and Principal at Collinwood. For many years, during summer months, Ben served as Director of Oakwood Children’s Day Camp. He retired in 1983 after 30 years of service in education, and moved to Tampa, Florida, two years later. Faith was of the utmost importance to Ben who attended mass regularly with his family at St. Paschal Baylon Catholic Church in Highland Heights, Ohio. Upon relocating to Tampa, he attended St. Timothy Catholic Church, where he served as a lector, a Eucharistic Minister, and developed the popular 55-and-up Club. Music played a vital role in Ben’s life. He was an accomplished accordionist, playing for many years with his band at local events and on radio, and later teaching accordion. He learned to play the organ, and he took great pleasure in playing at home, often with his wife and children singing at his side, especially at Christmastime. Ben is pre-deceased by his parents, Louis B. Mancine and Elizabeth [Gamellia], and his brother, Louis A. Mancine [Barbara Jones]. He was a loving and devoted husband to Evelyn [Roberts] for nearly 67 years, and a caring father to son Benjamin Jr. [Anne Fischer]; daughters Elizabeth [Jim Petro] and Laura; and son, Victor [Renee Little]. Benjamin also was a proud grandfather to Amy and Julie [Andrew Kellett]; Elise and Caitlin; Matthew; and Corrynn, respectively. Ben will be cremated at Trinity Memorial Gardens, and a private mass to celebrate his life will be scheduled for the immediate family only at St. Timothy Catholic Church. The mass may be streamed live on-line for parishioners and the public to view. Ben will be laid to eternal rest at Bushnell National Military Cemetery immediately following the mass. In lieu of flowers, donations are encouraged in Benjamin’s memory at St. Timothy Catholic Church, located at 17512 Lakeshore Road, Lutz, Florida, 33558. You may also visit https://sainttims.org/. To share a memory or to offer condolences to the family, please visit the following link: https://www.trinitymemorial.com/obituaries/Benjamin-Mancine/#!/PhotosVideos

The family of Benjamin J. Mancine created this Life Tributes page to make it easy to share your memories.

Send flowers to the Mancine family.