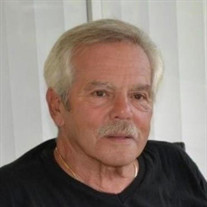 Finocchio, Vincent Joseph, 82, of New Port Richey, FL. beloved husband of Carole (Gessner) Finocchio passed away peacefully on March 4, 2022, at the Medical Center of Trinity. Vincent was born on November 30, 1939, in Greenwich, Connecticut. He was the son of the late, Joseph and Jeanette Finocchio. He retired in 1998 after owning and operating C&D Sanitation Inc. with Carole by his side. He was a hard working family man who loved his wife, daughters and granddaughters. Vincent had many hobbies. He enjoyed horseback riding, his Harley, and traveling around the United States to attend car shows with his hot rods. Vincent was a car enthusiast his whole life. In 2005 along with his whole family, Vincent moved to Trinity Florida. One of his favorite things he loved was going to his scheduled breakfasts with his daughter and niece, and with his brothers when they were in town. Vincent is survived by his loving wife of 55 years, Carole Finocchio. Daughter, Doreen Whiteley and her husband Doug, Daughter, Danielle Finocchio, four loving granddaughters Alexandra, Courtney, Amanda and Ashley along with his three brothers (predeceased) Robert and his wife Karen, Ronald and his wife Cindy and Thomas Finocchio and many loving nieces and nephews. A private family celebration of life will be held on Friday, March 11, 2022 at Generations Christian Church in Trinity.

The family of Vincent Joseph Finocchio created this Life Tributes page to make it easy to share your memories.

Send flowers to the Finocchio family.