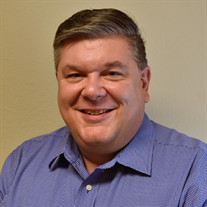 Scott Devlin Justice On Friday, July 12, 2019, Scott Justice, loving husband and father, went home to be with the Lord at the age of 48. Scott was born on April 23, 1971 to Yvonne and Randolph Justice. He was raised by his father, Randolph, and his step-mom, Mabel Justice. Scott grew up in Pikeville, KY and Lynchburg, VA. Scott graduated from Jefferson Forest High School, where he played football. Scott married Becky Conway on May 3, 2003. They have a daughter, Savannah, who is 12 years old. They recently relocated to Lakeland, Florida from Cleveland, Ohio to be near family and his company. Scott received his MBA from Averett University in 2000. Early in his career, Scott worked for Ericsson. Most recently, Scott was Vice President of Hydro Solutions Consulting, LLC. He was with HSC for 9 years and was responsible for program management and business development. Scott had over 23 years of experience managing complex programs and projects relating to telecommunications, engineering, and construction services. Scott was critical to the leadership and success of HSC over the years. He was respected and well-liked by his colleagues. Scott was a Godly man and loved serving as a head usher at Christ Community Chapel in Hudson, Ohio. He also loved Cleveland and their sports teams, especially the Indians. He enjoyed going to see baseball games with his friends and family. Scott was very patriotic and was quite the history buff. Scott also participated in many races including the Rock & Roll Hall of Fame and Gasparilla half marathons. He was friendly, jovial, and he always knew how to brighten a person’s day. His prankster sense of humor was well known. Scott was preceded in death by his parents. He is survived by his wife Becky, his daughter Savannah, his sisters Roberta Franklin (Earl) and Patsy Phillips (Glenn), and his brother Bobby James (Sondra). He also has many surviving extended family members. A visitation will be held on Monday, July 22, 2019 at Idlewild Baptist Church on 18333 Exciting Idlewild Blvd, Lutz, FL at 10:00 am with a funeral service to follow at 11:00 am. In lieu of flowers, donations may be sent to the Wounded Warrior Project.

Scott Devlin Justice On Friday, July 12, 2019, Scott Justice, loving husband and father, went home to be with the Lord at the age of 48. Scott was born on April 23, 1971 to Yvonne and Randolph... View Obituary & Service Information

The family of Scott D. Justice created this Life Tributes page to make it easy to share your memories.

Send flowers to the Justice family.