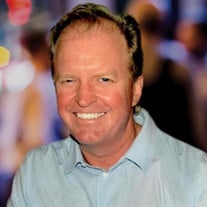 Robert John Scanlan of Tampa passed away Tuesday, February 8th on his 62nd birthday. A Florida native, he was born in Orlando to Edward and Marion Scanlan and grew up in Brandon. He spent his formative years as a stellar student at Nativity Catholic School where he was an altar boy and favorite with the teachers, priests and nuns. He had many happy days playing baseball with friends at North Brandon Little League – many of whom are still in his circle of friends today. He earned the nickname “Turtle” given his slow but sure nature – and that personified how he lived his life! Rob made an impact at Brandon High School where he served three years as Class President, was a NHS member and the VP of Key Club. For service to his school, he was named Mr. BHS for his graduating class of 1978. Rob graduated with honors from Florida State University with a double major in English and Business and went on to earn his Juris Doctorate from the University of Florida. A 33-year career as a civil trial attorney turned circuit court mediator and arbitrator, Rob built lasting relationships everywhere he worked. Co-workers became friends who became more like family. From stints at Smith & Williams, Allstate In-House Counsel, Barr Murman Tonelli and Morgan & Morgan, Rob never met a stranger on either side of the table. Rob loved monikers – if you didn’t have one, he quickly anointed you with one and it usually stuck. While he never shed his turtle nickname nor style, he picked up a new moniker which stuck - - and he will forever be known as Scooby to many. He got his energy from other people which is why when he went out on his own, he was thrilled to join forces with a former colleague and friend Jay Young to open up Hyde Park Mediation Group. Rob loved being a mediator and the connections he was able to make with so many different colleagues through the years. Rob married the love of his life, Katie Kenny, in 1994. The wedding and reception were epic and people still talk about it nearly 28 years later. She survives along with their daughters Sarah Kate and Megan. If you ever saw Rob or talked to him for more than 1 minute, you heard him gush with pride about his girls. He was smitten the day each of them were born and will continue to be their biggest heavenly fan. Rob is also survived by a large loving family including brother Chip Scanlan (Kathy), sisters Kayzie Weaver (Jimmy) and Elizabeth Northrup (Keith), Mother-in-law Christine Coffey (Mike), brothers-in-law John Kenny (Stacey), Mike Kenny (Suzanne) and Kevin Kenny (Mary), 18 nieces and nephews along with his beloved Aunt Betty Lou Scanlan and cousins. He is preceded in death by his father, mother, father-in-law, sister-in-law along with aunts and uncles. A memorial service will be held Saturday, February 12th at 12 noon at St. Peter the Apostle Catholic Church with his longtime friend and pastor, Father Michael Suszynski, serving as the celebrant. His best friend George Ferris will provide the reading. In lieu of flowers, the family is suggesting donations to the National Multiple Sclerosis Society, your local blood bank or to volunteer an hour at a non-profit organization of your choice serving others in need.

Robert John Scanlan of Tampa passed away Tuesday, February 8th on his 62nd birthday. A Florida native, he was born in Orlando to Edward and Marion Scanlan and grew up in Brandon. He spent his formative years as a stellar student at Nativity... View Obituary & Service Information

The family of Robert John Scanlan created this Life Tributes page to make it easy to share your memories.

Send flowers to the Scanlan family.