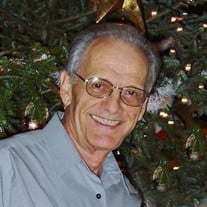 Robert “Bob” Irving Evers, 88, passed from this life on Friday, February 25, 2022. He was a faithful Christian and has received his heavenly reward. Born on October 24, 1933 in Cullman AL to Herman Evers, Sr and Mary Florence Hamilton Evers, Bob joined the Air Force prior to meeting the love of his life, Evelyn Joy Smith. They married August 11, 1954 just months before Bob was sent to Udine Italy during the Korean Conflict. Forever an Alabama fan, Bob was known for being a Jack of all Trades, willing to lend a helping hand whenever one was needed. If anything needed repair, everyone called on Bob. A loving father, he along with Joy taught his four daughters to love the Lord. He also taught them how to use a hammer, nails and saws. He was a jokester and always brightened a room with his smile. A dedicated Christian, Bob was a member of the University Church of Christ in Tampa, serving as an elder for many years. He was a servant to all, inspiring others to live as to receive the promised reward of heaven. He was loved and admired by young and old. He was a loving husband, father, grandfather “Opa” and great grandfather who always put God and his family first. He is survived by his loving wife of 67 years, Evelyn Joy Smith Evers, daughters Cyrisse Hudson (Barry), Lou Alice Quick (Mike), Leianne Harden (Len) and Robin Perez (Danny), 12 grandchildren, 28 great grandchildren as well as nieces and nephews. Bob was preceded in death by his parents, his mother and father-in-law, Vollie and Hattie James Smith, his brother Herman Evers, Jr (Sandra) and his sisters Ella Yvonne Evers Collins (George) and Edna Irene Evers Caretti (James). A memorial service for Bob will be held Saturday, March 26, 2022 at 11am at University Church of Christ, 14314 Bruce B Downs Blvd, Tampa, FL 33613. In lieu of flowers, the family requests donations be made in his name to Autism or Alzheimer’s research.

Robert &#8220;Bob&#8221; Irving Evers, 88, passed from this life on Friday, February 25, 2022. He was a faithful Christian and has received his heavenly reward. Born on October 24, 1933 in Cullman AL to Herman Evers, Sr and Mary Florence Hamilton... View Obituary & Service Information

The family of Robert Evers created this Life Tributes page to make it easy to share your memories.

Send flowers to the Evers family.