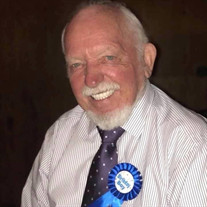 Paul Combs, 82, Southern gentleman, lover of hot boiled peanuts and devoted caretaker of his rescue dog, Calvin, went on to be with the Lord on February 2, 2021. He was born and raised in Bradenton, Florida. He graduated from Manatee High School in 1957. He was a Christian and believed in Jesus Christ with his whole heart. He spent the majority of his life working in the grocery industry, beginning as a bagger with Winn Dixie and working his way up to store manager. He continued as store manager for Shopping Basket in Brooksville, Florida. He also worked for Country Hearth Bakeries prior to retiring in 2004. He loved spending summers at his cabin in North Carolina. He enjoyed bowling, fishing, golfing, and playing cards and bocce ball with friends. He was a huge fan of the Tampa Bay Buccaneers, the University of Florida Gators football team, and the Tampa Bay Rays. He will be cheering hard for the Bucs in the Super Bowl on Sunday from the best seat in the house in heaven. He is preceded in death by his parents, William Russell and Geraldine Combs, daughter Leah Renée, and brothers Charles and Alton. He is survived by his wife of 44 years, Charlotte (Davis) of Trinity, Florida. Sons, Paul Russell “Rusty” (Angela) of Vidalia, Georgia, William “Scott” (Vanessa) of Brooksville, Florida, daughters, Robyn Evans (Brian), Paula Mizeski (Michael), and Pamela Greene all of New Port Richey. His sister, Susan Langman (Bob) of Blairsville, Georgia and brother Russell Combs (Ann) of Bradenton, Florida and 9 grandchildren. A private family service will be held at Trinity Memorial Gardens on Saturday, February 6, 2021 at noon. Donations in his honor may be made to the Humane Society of Pasco County which is where he rescued his beloved dog, Calvin. www.humanesocietyofpasco.org

Paul Combs, 82, Southern gentleman, lover of hot boiled peanuts and devoted caretaker of his rescue dog, Calvin, went on to be with the Lord on February 2, 2021. He was born and raised in Bradenton, Florida. He graduated from Manatee High School... View Obituary & Service Information

The family of Paul Combs created this Life Tributes page to make it easy to share your memories.

Send flowers to the Combs family.