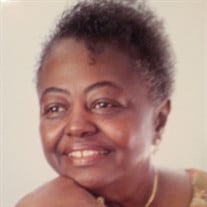 On Tuesday, February 5, 2020, Patricia Palin, loving mother, sister and friend to many passed away at the age of 71 with family at her bedside. Patricia, aka Pat or Pattie was born on January 28, 1949 in Newark, NJ to Thomas Preston Palin and Aline Cromity. In her early life she lived in Lawtey, FL with her mother and stepfather, Marion Thomas Lee. Her grandmother, Lou Emma Cromity also had a large part in helping to raise her. She attended RJE High School but graduated from Bradford High School. She attended Sante Fe Community College in Gainesville, FL and became an Executive Secretary at the University of Florida. She later moved to Newark, NJ where she started as a Chief Clerk and retired as a Manager of Office Services for Mayor Sharp James. Patricia’s career as a civil servant with the City of Newark spanned over 33 years. Patricia had a passion for traveling by land, sea or air. Some of her favorite international tours where in Canada, Italy, Spain, Rome, London or Paris. She also loved traveling through the US. Some of her favorite places to visit were Honolulu, San Diego, Chicago, New Orleans, Houston, Nashville, and on down the eastern coastline. There was no place she didn’t thoroughly enjoy. Not only a world traveler, Patricia’s life was defined by her love for family. She was preceded in death by both parents. However, she is survived by her daughter, Nicole Dickey and her husband, Calvin Dickey and grandchildren, Patrice and Calvin Jr. She is also survived by eight siblings: Thomas Preston Palin 2nd (and wife, Hattie), Dianne Lambert (and husband, Julian), Marion Tyrone Lee, Lillie Pearl Lee, Helen Victoria Lee, Gloria Bailey, Charles Edward Lee and Philip Louis Lee. She had a host of nieces, nephews and cousins which includes O’keima Terrell and Lou Emma Cromity who were so supportive til the end.

On Tuesday, February 5, 2020, Patricia Palin, loving mother, sister and friend to many passed away at the age of 71 with family at her bedside. Patricia, aka Pat or Pattie was born on January 28, 1949 in Newark, NJ to Thomas Preston Palin and... View Obituary & Service Information

The family of Patricia Palin created this Life Tributes page to make it easy to share your memories.

Send flowers to the Palin family.