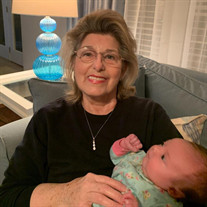 Patricia Michelle McGuirt, age 77, of Oroville, California passed away peacefully on August 24, 2021 due to cancer after a valiant 24 year fight. She was born on November 5, 1944 in Oroville, California to B.G. West and Willistine Mary Fultz. She had a sister and 2 brothers, of which Victor West is the only surviving member of the West siblings. Patti, as many of her friends and loved ones called her, grew up in Oroville, California. A small town just north of Sacramento. She and her brothers loved the outdoors. Patti’s horse was named Starlite. Her horse even trampled a rattle snake with her on it. As a young woman, she watched her brothers Clay West and Victor West depart the USA and fight in the Vietnam conflict. Patti has always loved her country and has always been proud of her brothers. At age sixteen Patti graduated high school and moved over to Pakistan with her father, B.G West. He was assisting in building the Mangla Dam. During this time, she taught P.E. to the American children in the local school. Several of the children she taught, kept in contact with her until the end of her life. A few years later, Patti met our dad. James William McGuirt III in Pakistan. He was in the Air Force and it was love at first site. They were married in Tampa, Florida on February 26, 1966. They were later sealed for all time and eternity in the Oakland California Temple on July 3, 1979. Patti lived a life of service. She had many callings in the Church of Jesus Christ of Latter-day Saints. Some of these callings were, teaching primary aged children, relief society teacher, seminary teacher and public affairs leader. The both of them remained faithful to each other and their love continues even through the eternities. Patti was a direct but kind individual. Patti had a soft heart. She always believed in being kind to others and would correct us when we were not. There were a few times when she had to set myself and my sisters in our places. We look back now and realize how grateful we are for her being this way. While mom did not play any musical instruments, she had the most angelic voice. Her love of music has been passed on to her children. Once I was told by her, that she would play classical music on her belly during her pregnancy with her children. She believed, as do I, that the music inspired all three of her children to have an aptitude and love for music. Patti is loved by so many and it is those memories which will keep her alive in our hearts. She will never be forgotten and we find peace in knowing she is with her eternal companion. Truly a wonderful, beautiful soul. We love you mom! We love you forever!!! Survivors include her daughters Kelly McGuirt Sherman, Michelle McGuirt Cottrell. Her son James William McGuirt IV. Patti McGuirt’s body will be laid to rest at Trinity Memorial Gardens on September 3rd 2021 next to her husband, James William McGuirt, III.

Patricia Michelle McGuirt, age 77, of Oroville, California passed away peacefully on August 24, 2021 due to cancer after a valiant 24 year fight. She was born on November 5, 1944 in Oroville, California to B.G. West and Willistine Mary Fultz.... View Obituary & Service Information

The family of Patricia McGuirt created this Life Tributes page to make it easy to share your memories.

Send flowers to the McGuirt family.