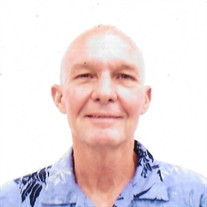 Melvin N. Bove, Jr. Melvin N. Bove, Jr. “Nick,” 76 of Land O Lakes, FL, passed away August 6, 2020. He was lovingly cared for by Hospice nurses and prayed for by Chaplain Mike in New Port Richey, in-patient unit while ending his battle with Alzheimer’s Disease. His wife, Patricia, of 53 years was with him day and night while his children and grandchildren visited. He will be deeply missed. He was an only child, born to Bertha Elizabeth and Melvin N. Bove on October 25, 1943, in St. Louis, Missouri. He was active in Boy Scouts with his dad and competed on swim teams. His family moved to Huntington, NY when Nick was age 16. After graduating from Huntington High School, he attended Mt. Union College in Alliance, Ohio for 2 years. He served in the US Air National Guard of New Jersey as Navigator from 1965 to 1973 in the 150th Aeromed Alft. Sq. Nick and Patricia married in 1966 in Greenlawn, NY, then resided in California for his navigator training. They returned to Long Island, NY and raised their two daughters, Michelle L. and Sandra P. He graduated from LIU, NY in 1972 earning a BS degree. Nick was always smiling and witty. He loved driving his Porsche with his friends that all had the same type of car. He enjoyed golf and tennis, walking on LI Sound at Sunken Meadow Park with his wife every clear day they could and when he retired, they enjoyed doing the same on the east coast of Florida. Nick had a green thumb. He enjoyed gardening and growing trees. Earlier in life he and his brother-in-law, Bob VanCott, had a nursery on LI, NY. Nick retired as an Account Executive from Reuben H Donnelley, that later became Verizon. In 2003, he retired from Verizon after 35 years. In 2004, he and his wife left LI for New Smyrna Beach, FL where they lived for 11 years. They later moved to the Tampa Bay area to be closer to their children and grandchildren. Nick and Patricia were members of the First Methodist Church in New Smyrna Beach, FL, where they helped feed hungry families. He leaves behind his wife, Patti and daughters, Michelle L. McClean and son-in-law (William) of Miller Place, NY and Sandra P. Triglia and son-in-law (John) of Trinity, FL. He was known as PopPop to his beautiful granddaughters, Chloe M., Gianna N., Emily F., and handsome grandson, Thomas J. He has a beautiful great granddaughter, Angelina. PopPop loved his grandchildren. They were the light of his life. The family took many trips to Disney and the beaches in Florida. Memorial service, August 22, 2020 at 12p.m. at Trinity Memorial Gardens, Trinity, FL, with Reception to follow at the family's residence. In lieu of flowers, the family requests any donation to be made to Gulfside Hospice of Heather Hill in-patient care in memory of Melvin N. Bove, noted on check or other. Gulfside Hospice 2061 Collier Parkway Land O Lakes, FL 34639-9978 Attn: Director of Philanthropy, Carla Armstrong

The family of Melvin N. Bove Jr. created this Life Tributes page to make it easy to share your memories.

Send flowers to the Bove family.