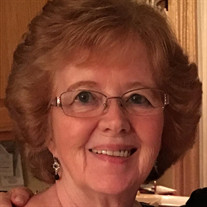 McAndrew, Maureen, 80, of Land O Lakes, Florida passed away peacefully on the evening of December 28, surrounded by family and friends. Born on October 20, 1939 in Rathreedane, Ballina, County Mayo, Ireland to parents John and Mary Neary, Maureen spent the majority of her childhood caring for, and cared for by, her beloved grandmother, Mary ‘Curley’ Smith in Rathreedane. Maureen immigrated to the United States in 1960 and initially settled in Chicago, Illinois. In 1963, Maureen married Marty McAndrew, also from Ballina, County Mayo. Maureen and Marty raised four children, moving from Illinois to Florida in 1980. Maureen is preceded by her husband of 48 years, Marty, who passed away in 2012. She is survived by daughters Kathy Mahoney and Caroline Perciavalle, sons Marty McAndrew and Billy McAndrew, daughters in law Mary Lank McAndrew and Teri Brown McAndrew, son in law Russ Perciavalle and eight grandchildren, RJ Perciavalle, Kevin Mahoney, Morgan McAndrew, Sarah Perciavalle, Cameron Brown and Sutton, Hudson and Leighton McAndrew. Further, Maureen is survived by two sisters, Winnie Neary and Celia Grady and sister in law, Bridie McAndrew and many nieces, nephews and grandnieces and grandnephews from Ireland, England, Chicago, Philadelphia and Atlanta. Maureen’s life centered on her family and the career that she launched in the 1960s. While raising her children, Maureen started a residential cleaning company with her husband that led to a long career in multi-family residential property management. Maureen was a great lover of dogs, famous for her Irish quips and for always being fashionably late. She was also renowned for her card play – specifically the game of 31. There will be a mass to remember Maureen at St. Timothy Catholic Church in Lutz, Florida at 11am on Friday, January 10. At 2pm that day, there will be a reception at Heritage Harbor Golf & Country Club, also in Lutz, Florida. The family welcomes flowers at the church or donations to The Humane Society of Pasco County, in Memoriam Maureen McAndrew, 14949 Harmon Drive, Shady Hills, Florida 34610.

The family of Maureen McAndrew created this Life Tributes page to make it easy to share your memories.

Send flowers to the McAndrew family.