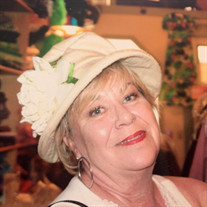 Martha Christa Hermes passed away peacefully in New Port Richey, FL on July 20, 2020 at the age of 73. She was born on March 2, 1947 in Lansing, Michigan to William and Rosemary Wackerly, and was the oldest of three girls. Martha (or “Marty,” as she became known in her adult years) attended Holy Cross Elementary School and graduated from J.W. O’Rafferty High School in Lansing, MI in 1965. After graduation, she got her first job as a telephone switchboard operator with Michigan Bell Telephone Co. She was introduced to Michael Hermes by his oldest brother, who happened to live next door, and they married in May of 1968. Together they raised three beautiful daughters, Gwendolyn Ericks, Amy Huth, and Krista Odette. After a 29-year marriage, Marty and Mike divorced but continued to be friends through the years. While raising her children, Marty was still very active in her community. She volunteered in her three daughters' activities in school and at Holy Cross Church, where they attended as a family for many years. She also served as President of the Knights of Columbus Ladies Auxiliary at Richard Council 788 in Lansing. While a member of the Auxiliary, she was asked to start a program called Knights Daughters with her good friend, Betty Schafer. Marty and Betty helped form numerous Circles throughout the state. Mike and Marty also ran a catering business in Lansing for many years. Mike did the cooking (thank goodness!) and Marty did the planning, organizing and decorating for each event. In 1989, Marty and Mike moved their family to northern Michigan (Benzie County) where they owned “The Alpine Restaurant” for a few years. She also worked at several local businesses in the area, one of her favorites was the Ben Franklin Store, which nurtured her love of crafts. Marty had many gifts and natural talents, one of which was painting. She enjoyed creating various landscapes, and taught art classes at many assisted living facilities in Florida. If you own one of her many paintings, you are so blessed--she didn’t give those away easily! After moving to Florida, Marty loved working part time for St. Luke’s Eye Clinic in Tampa. She eventually became a resident at Magnolia Manor ALF, Rocky Creek ALF, and finally settled down at Brookdale Senior Living in New Port Richey, Florida. This Great Lakes girl absolutely loved the water. Many times she would just take a long drive, pull off at a beach, get her paint and canvas out of the trunk and paint for hours. The results were breathtaking. She spent her last 17 years in Florida, making many friends along the way. Due to COVID-19, it has even very difficult to have any sort of arrangements at this time. Her family is respecting her wishes for her daughters to all be together on the water in honor of her memory. ‘’Martha was preceded in death by her parents, and her former husband, Michael Hermes, who passed away in 2018. Martha was also very recently predeceased by her brothers-in-law, Richard Ludman and Joseph Kelly, both of Michigan, as well as by Mike's three brothers and two of their wives. She is survived by her children, Gwendolyn Ericks of Lansing, Michigan, Amy (Michael) Huth of Odessa, Florida, and Krista (Andy) Odette of Frankfort, Michigan. Marty absolutely adored her six grandchildren: Taylor and Alexa Akers, Kayla and Tyler Huth, Madison and Matthew Odette, and her one great-granddaughter, Camryn Koval. She is also survived by her two sisters, Marilyn Ludman of Brooklyn, MI and Mary Ellen Kelly of Eaton Rapids, MI, as well as many loving nieces and nephews.

The family of Martha Hermes created this Life Tributes page to make it easy to share your memories.

Send flowers to the Hermes family.