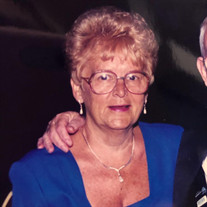 Margaret was born on August 25, 1933 in Brooklyn, New York, to Ernest and Lucy Kragh. She grew up with two sisters, Marion and Rosemary, and two brothers, George and John. She loved and adored her family of seven, and talked about them often... View Obituary & Service Information

The family of Margaret Powers created this Life Tributes page to make it easy to share your memories.

Send flowers to the Powers family.