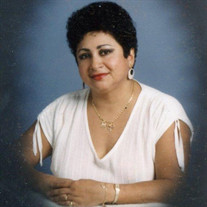 Luz Elisa Valencia (Rangel), daughter of Juan Bautista Rangel and Maria Antonia Lopez, was born on April 8, 1945 in Panama. After her mother’s passing, Luz moved to Colombia to be with family at the early age of 13. In Colombia she met Guillermo ("William") Valencia and they married on May 5, 1963. They had five children together: Sandra, Luz Angel, Sonia, Janeth, and William Jr. In search of a better life for her children and in the face of many challenges such as a language barrier, they relocated to the United States, eventually settling down in New Jersey where they raised their five children. Leaving NJ in 1988, they established themselves in Port St. Lucie, Florida. Luz was a full-time homemaker and supported her husband in becoming a Sheriff’s Deputy. Once her husband retired, they moved back to Panama briefly with their son, but returned to Florida, this time Tampa, to be close to family. Luz took great pride in caring for her family and loved ones and she devoted much of her life to caring for her husband and son who were ill. She was also an amazing cook whose empanadas, among other dishes, were loved and enjoyed by everyone who had the pleasure of knowing her. After the passing of her son and husband, Luz moved to be closer to her daughter, Janeth. Luz passed away on August 30th, 2021 after a hard-fought battle with COVID-19 and is survived by her daughters Sandra, Luz Angel, and Janeth; her sister, Sol Auer; her niece, Stacy Auer; and many beautiful grandchildren and great-grandchildren. She is and forever will be greatly missed and also appreciated for all she sacrificed so her family could live a good life.

Luz Elisa Valencia (Rangel), daughter of Juan Bautista Rangel and Maria Antonia Lopez, was born on April 8, 1945 in Panama. After her mother&#8217;s passing, Luz moved to Colombia to be with family at the early age of 13. In Colombia she met... View Obituary & Service Information

The family of Luz E. Valencia created this Life Tributes page to make it easy to share your memories.

Send flowers to the Valencia family.