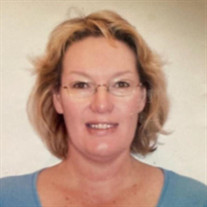 Linda Marie Buhl passed away April 10, 2021 at the Sturgill Hospice House in Brooksville, FL. Linda was born September 15, 1958 in Fort Wayne, Indiana, the second of 6 children born to Hilary and Redora Buhl. She graduated from George C. Marshall High School in Falls Church, VA where she lettered in track and field. Linda went on to receive her Bachelors of Arts in Business Management from George Mason University in Fairfax, Virginia. While there, she played on the Women’s Volleyball team which won the Virginia state championships. Title IX had recently been passed and colleges were just opening the door to women’s sports. Linda was also a charter member of the Alpha Omega Pi sorority as well as an initial resident of the on campus housing project at the burgeoning commuter University. Upon graduation, she worked in retail and financial management. In 1983 when she joined a startup company of 6 employees: Orbital Sciences Corporation. She successfully grew her career with OSC, finishing as a Configuration Manager in their engineering department in Dulles, VA. She primarily supported space systems for Earth-orbit, lunar and other missions, including the Pegasus rocket project. She was honored to have her name included on the list placed in the interplanetary spacecraft and flown to the main asteroid belt between Mars and Jupiter as part of the successful Dawn project. During these years, she found her joy teaching religious education to pre-K and Kindergarten students. For over 20 years, “Ms. Linda” was involved as a catechist of her Catholic faith. She retired from OSC in 2012, moving to West Virginia and then to Florida in late 2019. “Aunt Linda” was a favorite of her four nieces and three nephews. She loved celebrating holidays and special occasions with them. The celebration inevitably included the “whipped cream dance” and lots of laughter. Linda carried on the Buhl fishing tradition and many family memories were made fishing in “her” pond. She was always generously giving her home and heart to family in need. Her quirky wit and sense of humor was present until the end. She left the ICU nurses in tears of laughter as she would throw out a one liner even in the midst of her struggle. Linda joins her father Hilary John Buhl (2005) and two siblings Mary Margaret (1959) and Peter Joseph (1960) in eternal rest. She is survived by her loving mother Redora; her brothers and their spouses: Michael and Monica, and Duane and Cindy; her sister and spouse Diana and John Hurley; her nieces: Emily and Sydney Buhl, Hillary Buhl Oakley and Lauren Hurley; her nephews: Matthew Buhl and Stephen and Thomas Hurley. Linda’s faith and devotion strengthens her family as we grieve her passing. She had a special devotion to St. John Paul II and it is fitting she passed on the eve of Divine Mercy Sunday.

The family of Linda Buhl created this Life Tributes page to make it easy to share your memories.

Linda Marie Buhl passed away April 10, 2021 at the Sturgill Hospice...

Send flowers to the Buhl family.