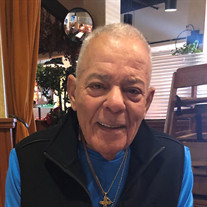 Joseph (Joe) was born on December 28, 1927 in Brooklyn, New York. He was the son of Dolores and Juan who were both born in Puerto Rico and moved to New York in the early 1920’s. Joe was one of 12 children born to them! Growing up in New York City was exciting and Joe had first-hand exposure to New York’s amazing arts and culture scene. He came to love a variety of musical genres, but especially jazz and salsa. He bragged that he would cut school to go listen to many of the great entertainers playing in New York City at the time! Joe became a world traveller at an early age. After attending a Maritime High School he joined the Merchant Marines traveling to South America and Africa. During World War II, merchant ships became valuable assets to the US military and Joe found himself deployed on ships in Europe, transporting troops and cargo in support of the war effort. This work would later be recognized by Congress as “active service duty” with the US Coast Guard. That’s how Joe became qualified as a Veteran of WWII. Joe’s world adventures on the high seas ended in New York in 1946 where he devoted himself to supporting his mother and younger siblings. He also became a competitive body builder, and worked various jobs for the NYC Transit Authority until eventually becoming a NYC Police Officer. As a career cop Joe worked the beat on Delancey Street, was an undercover cop on the “vice squad” and the Gambling circuit. He left the police force after 18 years of service and went on to work for the Legal Aid Society until his retirement in the late 1980’s. On June 17, 1950, Joe married the love of his life, Margaret Troche. They raised three children in South Ozone Park, New York: Adrian, Laura and David, all still thriving today. Joe is also survived by his sisters Sylvia and Anna, as well as two grandchildren Martin and Joseph. Joe and Margaret loved to travel and they frequently vacationed with Rosie and her husband George — Margaret’s sister and one of Joe’s best friend. Together they toured Europe, Canada, the Caribbean and the US. They also sailed on over 100 cruises! Joe was an avid NY Yankees fan, he also enjoyed football and in his later years he became a golf fan, although he never played. In retirement, Joe became a wood carver and he volunteered at his local senior center. While Joe was always a spiritual person, his devotion to the Catholic faith grew stronger in his later years. Finally, Joe was that guy that everybody liked! He was friendly, happy and he gave generously to those in need. Just like he dealt with all experiences in life, he managed his illness with a positive attitude. He passed away in San Jose, California just days before he would have turned 94.

Joseph (Joe) was born on December 28, 1927 in Brooklyn, New York. He was the son of Dolores and Juan who were both born in Puerto Rico and moved to New York in the early 1920&#8217;s. Joe was one of 12 children born to them! Growing up in... View Obituary & Service Information

The family of Joseph (Joe) Santos created this Life Tributes page to make it easy to share your memories.

Send flowers to the Santos family.