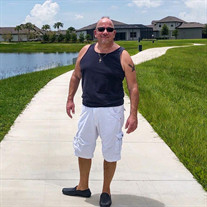 Joseph Thomas Curran III was born Wednesday, February 21st, 1961 in Ozone Park, New York to Angela and Joseph Curran and passed away on Wednesday, January 19th 2022. He is survived by his wife (Karen Curran), son(Joseph Thomas Curran IV), brother(Phillip Curran), and Mother(Angela Curran). A truly devoted man to his family, friends, and his profession, Joe always enjoyed the simple and beautiful things in life. From that first sip of coffee in the morning to a beautiful sunset, he just loved being at peace with his family, his favorite things, and his dream home in Florida. Anyone who knew Joe would say beyond the shadow of a doubt that he was an intelligent, loving, sharp witted man with an unparalleled dry sense of humor. He didn’t like to be the center of attention, but he sure knew how to make those in his circle laugh. His eyes would just light up and you can see the wheels in his head turning with hilarious stories of past experiences with his cousins and friends at any sort of family event. With all that being said, his wife and son were truly the apple of his eye. He married the love of his life, Karen on Sunday September 22nd, 1985 and the two gave birth to their only son, Joseph on Wednesday, November 18th, 1987. Joe always put both of them first in his life while putting himself in a VERY far last. I don’t think Joe realized how many people truly loved him and cared for him throughout his life because he was so busy putting others first along with putting his own feelings and emotions aside. The great thing is now he can look down and truly see how beautiful of a human being he was inside and out and how many people truly cared for him. Joe will be receiving a private burial Monday, January 24th, 2022 with two memorials to follow in both New York and Florida at a later date so we can celebrate his life.

The family of Joseph T. Curran III created this Life Tributes page to make it easy to share your memories.

Send flowers to the Curran family.