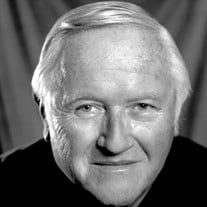 SANFORD, FL. - Joseph A. Connolly, 91, a retired sales account executive for Conagra Foods, died September 8 after having lived a full and active life. He leaves behind his beloved wife of almost 67 years, Helen D. (Dolores) Connolly. Joe – a father of five and grandfather to seven – was a member of the Smithfield Lodge of Elks No. 2359, a Korean War veteran and deeply involved in the catholic church. Throughout his life, he was active in several parishes – St. Thomas Aquinas in Providence, RI; St. Charles Borromeo Parish, Kansas City, MO; and, most recently, St. Peter The Apostle in Trinity, FL. At St. Peter The Apostle, he was a founding member, sang in the choir and was a volunteer with St. Vincent de Paul. Joe loved meeting people, which served him well as the quintessential traveling salesman. He would quickly know your life story and remember you forever. As a food salesman and account executive, he sold many well-known products, from Libby to Green Giant to Slim Jim for GoodMark Foods, which later became Conagra. He loved to celebrate all things Irish – including the music, food and St. Patrick's Day parties – and was thrilled to travel to Ireland with his wife after he retired. Anyone who knew Joe, knows he doted on Dolores. They enjoyed many cruises and trips around the world. In his retirement, Joe was able to spend more time golfing and picked up a new hobby with Dolores – acting in the local theater. He spent hours practicing his lines and welcomed all the new people he met through the Richey Suncoast Theater and at the Heritage Springs Community Theater. He truly relished the attention his roles brought him and loved to share his new hobby with family. Joe lived in Rhode Island, Maine, Missouri and Florida and was the son of the late William E. and Mary J. (Quinn) Connolly. In addition to his wife, he leaves behind three sons and two daughters: Joseph M. and (Kim) Connolly of New York; James W. and (Renee) Connolly of California; Karen and (Vic) Cardoza of California; Maureen and (Mike) Mann of Texas; Kevin and (Amy) Connolly of Florida; and seven grandchildren; Christopher, Michael, Logan, Lucas, Patrick, McKenna, and Quinn. A funeral mass will be held Thursday, Sept. 30 at 11 a.m. at St. Peter The Apostle Catholic Church, Trinity, FL, and interment will be at the Florida National Cemetery in Bushnell.

The family of Joseph A. Connolly created this Life Tributes page to make it easy to share your memories.

Send flowers to the Connolly family.