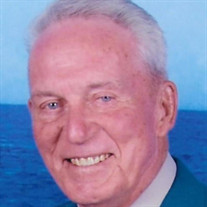 On Tuesday, March 23, 2021 Commander John L. “Jack” Sullivan passed away peacefully at the Marilere Hospice Care Center in New Port Richey, FL. He was 97. Jack was born in Rockaway Beach, Queens NY, August 16, 1923 to Cornelius Sullivan and Catherine Sullivan. He had one sister, Marian who was born in February of 1926. In 1934 the family moved to Brooklyn, NY where Jack studied and played football and baseball at Brooklyn Prep. Upon graduation, he joined the Christian Brother’s Novitiate in Barrytown, New York but when World War II was declared he felt a greater need to serve his country so he left the Novitiate and joined the Navy. Jack Sullivan’s life as a Naval Reservist took him around the world and provided him with an education and background that served him well. He met and became friends with people of all different social strata who, like himself, served this Country in wartime environments. Cdr. Jack Sullivan, USNR, was a proud member of the Gladiator Squadron and was the Banshee Jet Fighter Pilot that led the last air strike and made the last carrier landing of the Korean War. Since he was a recalled Police Detective from New York, the headline read; “New York City Cop Blows Whistle on Korean Police Action.” After Korea, Jack returned to the Detective Division in NY and requested a precinct squad. He was assigned to the 61st Squad in Brooklyn, NY. Because of Jack’s experience and military background as a fighter pilot, the Chief of Detectives wanted him in The Bureau of Special Services and Investigations (BOSSI). The Chief agreed to allow Jack to be assigned to the precinct with the provision that when the President, Dignitary or Foreign Head of State came to NY, Jack would be the one assigned to their protection details. During this time Jack worked closely with the Secret Service and guarded President Truman and the Soviet Chairman, Nikita Khruschchev. In 1962 during the Cuban Missile Crisis that Jack was called back to active duty in the Navy where he served at various Naval Bases around the world as Aircraft Maintenance Officer. In 1969 he was the Officer that built the legendary Catapult in the Cubi Point Officers Club in the Philippines that was featured in the book: “The Flight of the Intruder,” by Stephen Coonts and movie of the same name. In later years he was Project Manager of Grumman Aerospace for the advanced Squadron of Iranian F14 Fighter Jets stationed at Shiraz, Iran. He was the last one to leave that country after the Shah had abdicated and Kohmeini arrived and assumed control. Commander Sullivan was a decorated officer and served in three wars: World War II, Korea and Vietnam. Jack retired from the Navy in August of 1971 and he and the family settled in St. Mary’s County MD. He was an active member (and President) of the Lexington Park Rotary Club and other various organizations. In 2003, upon the passing of his wife, Joan, Jack moved to Trinity FL and into Heritage Springs where he was an avid golfer and active participant of “the best community” he had the privilege to be a part of. In addition to his love of golf, Jack was a natural story teller and loved a good joke. He never met a stranger and was loved and respected by everyone who knew him. He was proud of his Irish and German heritage and never turned down a good meal. Jack was preceded in death by his beautiful wife, Joan Elizabeth Sullivan and is survived by his children, John L. Sullivan Jr. of Wesley Chapel, John’s wife Suzanne, Maura A. Sullivan of Woodbridge, VA. and his grand dog, “Jack”. He is also lovingly survived by numerous nieces, nephews, cousins and friends. The family asks that in lieu of flowers donations be made to HPH Hospice Marilere Care Center of New Port Richey FL.

The family of John "Jack" Sullivan created this Life Tributes page to make it easy to share your memories.

Send flowers to the Sullivan family.