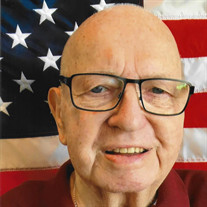 John Logue, beloved husband, father, grandpa, great-grandpa, uncle, brother, and friend passed away peacefully at home on April 8, 2020. John was born in Brooklyn, NY on December 5, 1932 to Andrew and Charlotte Logue. He was the fourth of nine children who attended Our Lady of Perpetual Help School, taught by the Sisters of St. Joseph. He attended Alexander Hamilton High School in Brooklyn. John was a proud U.S. Navy veteran. On February 6, 1954 John married Mary Rogan, the love of his life. He often said, “Marrying Ma was the best decision I ever made in my life.” John is survived by his wife of 66 years, Mary, and five loving children: John (Patricia Dwyer), Kathy (Joseph Duggan), Maryann (Tony Behette), Danny (Patty McDonald), and Gerard. He was a proud grandfather to Douglas, Brian, Kristy, Maureen, Travis, Danielle, and Allison. He was also a doting great-grandfather, affectionately known as “Papa John”, to Lane, Maeve, and Vincent. John loved his time as the owner of Hinsch’s Ice Cream Parlor and Luncheonette. There he worked tirelessly to provide for his family while making delicious, homemade ice cream, sandwiches, and burgers. It was a popular gathering spot in Bay Ridge and many people, to this day, continue to share fond memories made at Hinsch’s. Everyone had a favorite item, whether a black-and-white ice cream soda or a shrimp salad sandwich. Holidays were filled with the aroma of homemade chocolate. John was often referred to as the “Chocolate Man”. All of John’s children, as well as many of the young people who worked for him through the years, were molded into hard-working and responsible adults of good character. He fostered an environment where family came first. He assisted many people in finding successful and fulfilling careers. John retired from Hinsch’s after 47 years and relocated to Florida in 1995. There, he was able to have more time with his family. He loved fishing, going for rides, and watching beautiful sunsets. Most important to him, though, were family gatherings and shared meals. John was devoted to his community, friends, and extended family. He was a longtime friend of Bill W (56+years) and quietly helped many in need. In turn, John was grateful that he had friends when he needed them. He paid it forward, before it was popular. Although Alzheimer’s disease stole many memories, he never lost his devotion to Mary, family, faith, military service, and what the “Program” gave him throughout his lifetime. We are very blessed that he remembered us until the end. As his memory faded over the last few years, his wife, children, grandchildren, and great-grandchildren still enjoyed spending time and creating memories with him. These moments always brought out his beautiful, infectious smile. Even if they were fleeting memories, in those moments he was always happy and grateful. His parting words were often, “Love You” and “Get home safe” and “Call me when you get home.” John had a sense of humor and a hearty laugh. If you said, “I’ll see you tomorrow,” he would say, “Thanks for the warning.” All who knew him are blessed and he is dearly missed. Mass of Christian Burial at St. Peter the Apostle Roman Catholic Church 12747 Interlaken Road Trinity, FL will be on Tuesday, April 14 at 11am. Entombment will follow at Trinity Memorial Gardens 12609 Memorial Drive Trinity, FL. In lieu of flowers, please consider a donation in memory of John Logue to the Alzheimer’s Foundation of America. https://alzfdn.org/support-us/donate/

John Logue, beloved husband, father, grandpa, great-grandpa, uncle, brother, and friend passed away peacefully at home on April 8, 2020. John was born in Brooklyn, NY on December 5, 1932 to Andrew and Charlotte Logue. He was the fourth of nine... View Obituary & Service Information

The family of John Logue created this Life Tributes page to make it easy to share your memories.

Send flowers to the Logue family.