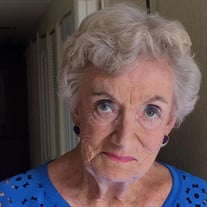 Joan Upchurch passed away on March 14, 2022. Joan Kay King was born July 22,1936 in Washington, D.C. She was the oldest of 2 children to John and Ruth King. Her brother, John Jay Jr., proceeded her in death Aug 2014. Joan attended Montgomery Blair High School where she met Don Upchurch in 10th grade Biology class. Joan and Don were married January 12, 1957, and immediately moved to Mt. Pleasant, PA. Joan & Don were transferred 8 times for JCPenney within Pennsylvania, Indiana and Michigan. Joan’s career includes Administrative Assistant to the Dean of Ball State University, Office Manager at The Norton Examiner, a weekly newspaper and Advertising Manager at Michigan Bulb online nursery. Joan and Don retired in 1994. They finally got to move where they wanted to live! They left the snow-belt and moved to Florida, golfing and the beaches were the draws. They built their beautiful villa on the 16th fairway at Crescent Oaks Country Club where they could enjoy sunsets daily. She never had to move again. Joan now had time to learn golf! She started the “Happy Hookers” women’s golf group at the club. Playing 3 times weekly, her game did improve, winning and placing in many Club Championships. Her golfing highlight was a Hole in One in April 2006. She and Don regaled in their social group, traveling and playing golf. Joan also enjoyed playing Bridge, Bunko, Bingo and Trivia at the club. Joan served on the HOA for years heading the Architectural Committee. She had a critical eye and believed in following the rules. Joan’s family was the most important thing in her life. She was proceeded in death by Don in 2009. She’s survived by 4 children, Jeff (Donna), Bob (Debra), Kim, and Richard (Karyn); 6 grandchildren and 5 great-grandchildren. A Celebration of Life will be held at Crescent Oaks Country Club Sunday, March 20, 2022, 1-4pm. The family requests in lieu of flowers please consider donations to Breast Cancer Awareness and/or Suncoast Hospice.

Joan Upchurch passed away on March 14, 2022. Joan Kay King was born July 22,1936 in Washington, D.C. She was the oldest of 2 children to John and Ruth King. Her brother, John Jay Jr., proceeded her in death Aug 2014. Joan attended Montgomery... View Obituary & Service Information

The family of Joan Upchurch created this Life Tributes page to make it easy to share your memories.

Send flowers to the Upchurch family.