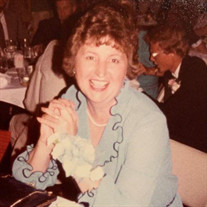 Joan Elizabeth Fox Heinsen was a force of life and a caring wife, mother, grandmother, great-grandmother, sister, aunt, and friend. She left this world very unexpectedly in her home in Trinity, FL on November 30, 2021, at the age of 83. Joan was born on August 22nd, 1938, to Carlton and Oleta Fox in her cherished hometown of Toledo, OH. After Joan graduated from Whitmer High school in 1956, she attended the University of Toledo for 2 years. In 1957, she met Robert “Bob” Heinsen while working at Lions Department Store. Joan and Bob got married in 1958 and had 3 children: Marc, Craig and Janel. Joan and Bob immediately embarked on an incredible adventure together. They lived in 8 states/14 cities and a total of 17 homes. Joan was always quick to remind everyone that she alone executed all the moves and was the “mover extraordinaire”! As anyone who knows Joan and Bob, they enlightened a room and brought non-stop laughter to anyone in their company. Even though Joan never had a career outside of the home, she selfishly took extraordinary care of her family and was the consummate “mother-hen” who made sure everyone she knew was doted on and loved. Anyone that met Joan immediately loved her loud wit, vivaciousness, and zest for life. Joan was preceded in death by her parents, Carl and Oleta, her sister Luette, her brother-in-law’s Mike Erisman, Danny Sniegowski, John Chambers and Tony Heinsen, her sister-in-law Betty Chambers, her dog Sam and her grand-kitties, Kiki & Booboo. Her memory will be cherished and kept alive by her loving and adoring husband of 63 years, Bob, her three children, Marc of Clearwater, FL, Craig of Cincinnati, OH and Janel (and Steve) of Spring Hill, FL. She had six grandchildren and one great-grandchild and two grand-kitties. She also leaves behind her beloved sister and best friend, Linda Erisman, her baby brother, Rick Fox, and her adoring sisters-in-law Eileen Sniegowski and Mary Lou Houle. Joan was also an amazing aunt to sixteen beautiful nieces and nephews.

Joan Elizabeth Fox Heinsen was a force of life and a caring wife, mother, grandmother, great-grandmother, sister, aunt, and friend. She left this world very unexpectedly in her home in Trinity, FL on November 30, 2021, at the age of 83. Joan... View Obituary & Service Information

The family of Joan Elizabeth Heinsen created this Life Tributes page to make it easy to share your memories.

Joan Elizabeth Fox Heinsen was a force of life and a caring wife,...

Send flowers to the Heinsen family.