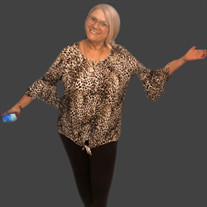 Janet was born in Brooklyn, New York on January 23, 1950. The daughter of Stanley and Jean Oglesby. Janet was one of five siblings. She is survived by her loving husband of 50 years, Larry Stanonis, her 3 Children, Tina Polleiner (Walt), Sybil Stanonis, Anthony Stanonis (Jamie), 11 grandchildren, 7 great-grandchildren, her sister Diane Mason, sister in law Lorraine Oglesby, brother in law Tommy Cox, many cousins, nieces, nephews, friends and “the pinky’s.” After graduating High School and completing beauty school Janet worked in Manhattan as a secretary before moving to Florida 44 years ago. Janet was a very dedicated wife and mother. As her children got older, she decided to go back to work in the school system as an administrative assistant. From there, her career grew through the Pinellas County School System where she made lifelong friends and impacted the lives of many. After retiring from Pinellas County Schools, Janet worked at USF in both the Neonatal Department and then later, with the Forensic Psychology Department. Before her final retirement, Janet went to work for ERS, where she was with her husband and son. Janet spent her later years devoting her time to helping children who could not help themselves. Janet accepted the responsibility of guardian ad litem and held Metropolitan Ministries close to her heart. Janet will always be remembered as being fun, jovial, and selfless. She was also a very spiritual woman, who had a deep connection with God. She will be deeply missed by her family, friends, and all those who came in contact with her. If desired, in lieu of flowers, donations can be made in honor of Janet Stanonis to metromin.org or Metropolitan Ministries 2002 N Florida Ave, Tampa, Fl. 33602. (813) 209-1000

Janet was born in Brooklyn, New York on January 23, 1950. The daughter of Stanley and Jean Oglesby. Janet was one of five siblings. She is survived by her loving husband of 50 years, Larry Stanonis, her 3 Children, Tina Polleiner (Walt),... View Obituary & Service Information

The family of Janet Stanonis created this Life Tributes page to make it easy to share your memories.

Send flowers to the Stanonis family.