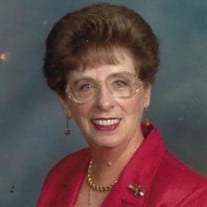 Janet Eileen Reeves, née Smith, 85, of Wesley Chapel, Florida, a retired legal secretary, beloved mother and loving grandmother, died of complications from Alzheimer’s in the early hours of Thursday, June 10. Born in Maracaibo, Venezuela, to Horace and Carmen Smith, she emigrated with her family to the United States in 1947, and grew up in Westfield, NJ. She was graduated from Westfield High School and the Berkeley School of East Orange. She attended the University of North Carolina at Greensboro. She married Harold Shillito Reeves in 1968, who passed away in 2002. She is survived by her two children, Harold Smith Reeves, of Great Falls, VA, and his wife Daniela Reeves, and Jennifer Anne Richard, of Wesley Chapel, FL, and her husband, Robert Richard, and two grandchildren, Katherine and Lauren Richard. Arrangements are being handled by Trinity Funeral Home.

The family of Janet E. Reeves created this Life Tributes page to make it easy to share your memories.

Send flowers to the Reeves family.