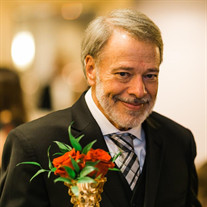 On February 22, 2021, James (Jim) Gregory Avery was called home to be with the Lord, his parents, and his other loved ones. He was 67 years old. Jim was a resident of Cobbtown, Georgia where he lived with his wife of 32 years, Mary Mitchell Avery. Jim called her affectionately, “Madame Queen Jr.” She was the love of his life. Jim Avery was born on December 10, 1953 in Live Oak, Florida at Suwannee County Hospital to Marguerite Louise Rhoden Avery and David Johnathan Avery. He was their third child and was described by his mom as her first “normal” child since he was the first to be carried full term. The family moved to Gainesville, Florida in 1955, along with most of his dad’s family, seeking a better life. His parents acquired employment at Sunland Training Center in Gainesville. Jim’s early education was at Stephen Foster Elementary School in Gainesville. Jim was very athletic and played basketball at Ft. White and football at Gainesville High School. He joined the United States Army where he was stationed in California and Germany. Jim completed his basic training in Missouri. His first assignment sent him to California. It was here where Jim would regale you of his exploits and experiences in the Mojave Desert with the 7th Infantry. While in California, Jim indulged his passion for cars, purchasing a Datsun 240 Z. Through the years, Jim talked of his California adventures told through the eyes of a charmed Southern boy. Jim would leave the Army and rejoin the military as a consultant contractor. While stationed in Germany, Jim applied his country humor and perspective to improve international relations between the United States and West Germany. It was rumored that Jim’s affable outlook and use of Jimisms were used in 1989 to help bring down the Berlin Wall. Coincidence? I think not! Returning with his pockets full of Uncle Sam’s cash, Jim indulged himself once again. Once in the States, he picked up his specially ordered Jeep CJ-5. Jim decided to expand his education, obtaining an Associate Degree at Armstrong State College. Enjoying his time in the city of Savannah, Jim began working at Gulfstream Aeronautics. In time, Jim would find work in Houston, Texas. Here, he reunited with his mother, brother David Avery, and his sister Bernadette (Bernie) Cannon. But eventually Jim heard the old home fires call him back to Gainesville, Florida. Jim again found himself drawn to his beloved cars and worked at a Mercedes dealership. He used this time to follow and support his favorite sports team, the Florida Gators. Jim was particularly fond of the football and basketball teams. It was then that Cupid’s arrow struck Jim’s heart. Jim met his True Love, Mary. The two were married and, with their union, blended two broad ranging families together. This union brought together children, Chris Avery of Gainesville, FL; Josh Avery (Deanna) of Salem, MO; Ashley Avery (Allen) of Pittsburgh, PA; Samantha Houle (Steven) of Brandon, FL; Mary Pfaffko (Max) of Washington, DC; and, Jim Mitchell (Sarahy) of Bogota, Columbia; and godsons, J.T., Collin, and Todd Edgar of Cobbtown, GA. These children have produced for their Oma and Opa an additional eight grandchildren and six great grandchildren. Jim relished all his titles as Husband, Brother, Uncle to his nephews, James and Daryl, and, in particular, Opa. Mary and Jim yearned for a simpler life, and they found themselves in the bustling metropolis of Cobbtown, USA. There, they have resided for the past 29 years. Jim found himself working as an Officer with the Georgia Department of Corrections, where he demonstrated his natural ability to lift up those most in need and bring out the best in them. Finally, he ended his working career with the Tattnall County school system. Jim eventually retired and became a member of the Cobbtown Masonic Lodge. Jim was a great and loving friend. He was a patient leader to his children. The ultimate friend to all in need. To each one of us, he passed remarkable words of wisdom, golden nuggets of worthy sage advice. Whatever your situation, Jim had an “ism” for it. To know Jim, you had to know he was a big music fan. He followed a young Tom Petty with his early group Mudcrutch. Jim was a blues lover, and you could find him listening to everything from Ray Charles to Stevie Ray Vaughn to Joe Bonamassa. Towards the end, when things became difficult, his heart and soul returned to his music. As in the song, Sweet Home Alabama, when the guitar intro starts, Jim would always say, “Turn it Up!” Today, we mourn a man, a life, and a legend. The only sound I can hear is the laughter of those Jim is entertaining with his wit and humor. Now he belongs to the ages with the likes of Plato and Aristotle, only with a Southern twist. You are missed but Never forgotten. The service will be held March 6th at Trinity Memorial Gardens at 12609 Memorial Drive, Trinity, FL 34655. The Memorial service will start at 11am, followed by the Graveside service. The family asks that, in lieu of flowers, donations be made to the Mayo Clinic and the Alzheimer’s Foundation. The Mayo Clinic https://philanthropy.mayoclinic.org/donateMC was so sweet and loving to Jim with his cancer treatments, and it was here that Jim got to ring his bell that he beat his cancer. The Alzheimer’s Foundation https://www.alz.org/nca/donate gives us hope that we will one day find a cure. Masks are required to attend the service.

On February 22, 2021, James (Jim) Gregory Avery was called home to be with the Lord, his parents, and his other loved ones. He was 67 years old. Jim was a resident of Cobbtown, Georgia where he lived with his wife of 32 years, Mary Mitchell... View Obituary & Service Information

The family of James Avery created this Life Tributes page to make it easy to share your memories.

Send flowers to the Avery family.