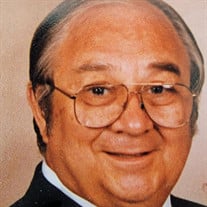 To view the live stream service please click the following link: https://view.oneroomstreaming.com/authorise.php?k=1626054801628609 James Patrick Ahearn, M.D. (89) passed peacefully at home on July 5, 2021. He was born December 14, 1931, to Irene and George Ahearn in Syracuse, New York. He was Jimmy Pat to his parents. His father was sports editor of the Syracuse Post Standard and met an untimely death in an auto accident when his young son was only 18 months old. His mother and Jimmy Pat relocated to her family home in Bridgeport, CT., where he was raised. His first eight years education was completed at St. Charles Parochial School where he and his mother were parish members of St. Charles Church. In his youth, he was an acolyte and choir boy. He had a paper route and was a shoe-shine boy to help his widowed mother financially. He completed high school at Warren G. Harding where he was a dean’s list student. This is where he developed his interest in the sciences majoring in chemistry. He was on the school newspaper, a cheerleader and had the lead in his senior class play. He continued his education at Lafayette College, Easton, PA, majoring in Chemistry. His education was interrupted by the Korean War. He was drafted into the U.S. Army spending his tour as a chemist and lab tech at Ft. Sam Houston in San Antonio, TX Once his tour of duty was completed, he finished his education at Lafayette. Then it was onto Tufts Medical School, Boston, MA, where he obtained his MD degree. He subsequently did his internship with the United States Public Health Service as a Lt. Commander. He completed his radiology residency in Philadelphia, PA. This led him to Tampa, FL where he co-founded with Dr. Alan Sheer, the radiology practice of Drs. Sheer, Ahearn and Associates. His practice encompassed numerous hospitals including University Community Hospital, Brandon Hospital, Women’s Hospital, Centro Asturiano and Centro Espanol Hospitals plus a private radiology practice. His love of flying paralleled that of medicine and was an instrument rated private plane pilot. He was always ready to get in his plane and take a trip whether it be to fly around Tampa or go cross country to California or Colorado. He was known to always have a project in progress from adding on to his former home numerous times to building two helicopters in his home workshop. He is survived by his wife, Carol (McMeans) Ahearn, a son, James, Jr., two daughters, Elizabeth (Betsy) Klauder (Tim), and Jennifer Koch (Thomas); and a stepdaughter, Sarah (Robinson) Ford; nine grandchildren, Adam Mishler, Bradley Smith, Chance Mishler, Tobias Koch, Kayla Ford, and Oliver Koch along with Isabelle Klauder, Logan Ortwerth and Miles Klauder; and ten great grandchildren. He is predeceased by his parents, George and Irene (Gunger) Ahearn and his first wife, Barbara (Berger) Ahearn The family would like to thank the doctors who over the years treated him during various hours of need; the staff at Advent Hospital and St. Joseph’s Hospitals; the staff at Angels Home Healthcare and LifePath Hospice. In lieu of flowers, donations can be made to St. Jude’s Children’s Research Hospital, Memphis, TN and LifePath Hospice, Tampa, FL. Funeral services will be held at Trinity Memorial Gardens, 12609 Memorial Dr., Trinity, FL, on Tuesday, July 13, 2021, with visitation beginning at 10:00 and service following at Noon.

The family of James Patrick Ahearn created this Life Tributes page to make it easy to share your memories.

Send flowers to the Ahearn family.