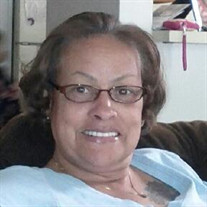 Jacqueline Laverne Thoroughgood was born on April 23, 1948 at Beebe Hospital in Lewes, Delaware to Lucinda Thoroughgood and John Ross Burton. Both parents preceded her in death. Jacqueline, better known as Jackie, was raised by her mother with the help of her grandparents, Curney and Lucinda Thoroughgood. Her father visited often and ensured her needs were met. Jackie passed away peacefully on January 7, 2020. She is survived by four sisters and 4 brothers. Colleen Thayer (Harry) - a sister from her mother and stepfather, Ira Barnes, Sandra Lee Neal (Richard), Ross Burton (Angela), Risden Burton, Robert Burton (Susan), Fonda Meekins (Gary), Christina Jones and Ronson Burton (Theresa) – siblings from her father and stepmother, Ethelda Burton, two aunts, Helen Cook and Bertha Jones, and 15 nieces and nephews. Jackie attended Frederick Douglas School from first through eighth grades and graduated from Seaford High School in 1966. She was an honor roll student and participated in many activities, including the Nurse’s Society and Honor Society. Jackie was the first person of color to be inducted in the National Honor Society at Seaford High School and was a member of the second class to integrate the school. Jackie would go on to receive her Diploma in Nursing from Bellevue Hospital School of Nursing in New York in 1969. She received her Bachelor of Science and Master of Science from University of St. Francis. Jackie married Marvin Miller Smartt on November 11, 1972. From this union three daughters were born, Moravia, Marnese and Marnique which would bring eight grandchildren, Morielle and Dorian Austin, Johnathan, Justin, Maritza and Jovanna Cruz-Smartt and Nicholas Smartt and David Thomas. Jackie worked in several positions in New York before moving with the family to New Orleans. After Marnique was born, the family would move to Memphis, TN where Jackie would hold several positions over the next 36 years while working at the City of Memphis Hospital (The Med). Marvin and Jackie divorced in 1993 and Jackie would go on to have a 17-year relationship with Robert Hawkins and his 3 children, Rachel Washington (Byron), Robert III and Reginald. Both Marvin and Robert would precede Jackie in death. In 2018, Jackie relocated to Florida to be closer to her children. In early 2019, she was diagnosed with T-Cell Lymphoma and would undergo treatments for the next year until her passing. Jackie’s hobbies were traveling and playing slots at the casino. She always had a big heart and enjoyed helping people which she did generously. Her charities are St. Jude Children’s Hospital and the American Red Cross. When asked if Jackie had any last words for her family she said, “I have been blessed to have lived for 71 years and I have done everything I wanted to do. I have no regrets. I have a great family and have had a great life and couldn’t ask for anything more than that. I love and will miss you all.”

Jacqueline Laverne Thoroughgood was born on April 23, 1948 at Beebe Hospital in Lewes, Delaware to Lucinda Thoroughgood and John Ross Burton. Both parents preceded her in death. Jacqueline, better known as Jackie, was raised by her mother with... View Obituary & Service Information

The family of Jacqueline L. Smartt created this Life Tributes page to make it easy to share your memories.

Jacqueline Laverne Thoroughgood was born on April 23, 1948 at...

Send flowers to the Smartt family.