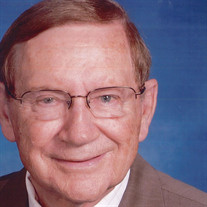 Herbert James Powell, 89, passed away November 9, 2020. He was born on the family farm September 2, 1931 in Pinconning, MI to William and Dorothy (Jacobi) Powell. Herbert served his country in the 1611th Air Transport Group McGuire AFB, Trenton, NJ. He received the Korean Service Metal, National Defense Metal, United Nations Service Metal, and the Good Conduct Metal. He started working for Amoco Oil Co. in 1956 where he met the love of his life, Mary L. Spurling. They were married May 30, 1964 at Grace Lutheran Church in Detroit, MI. Amoco Oil transferred Herb and Mary from Detroit to Atlanta, GA and finally to Kansas City, MO. In 1988 they retired. Herbert and Mary moved to Trinity, FL in June 1993 from Olathe, KS. Herbert was a member of the Bethel Lutheran Church. He served as an Elder from June of 2009 to June of 2014 and sat on the Board of Evangelism. After 42 years of marriage, Mary passes away on December 11,2006. Herbert is survived by his oldest sister, Virginia Meyer and several nieces and nephews. He was preceded by his parents, sisters, and brother-in-laws, Walter Meyer, Leona and Bernard Reinhart, Ethel and Walter Krystyniak, and two infant sisters. He is also survived by brother-in-law and sister-in-law, Louis and Mary Ann Spurling, Margaret Lane and was preceded by Rita Nelson, Bill Lane. Herbert was very thankful for his very dear friends, David and Linda Brandstatter. Visitation will be held on Saturday, November 14, 2020 at 10:00AM until the time of service at 11:00AM from Bethel Church, Clearwater. Pastor Eichinger will officiate. Those planning an expression of sympathy are asked to consider Bethel Lutheran Church or the Scleroderma Foundation.

The family of Herbert Powell created this Life Tributes page to make it easy to share your memories.

Send flowers to the Powell family.