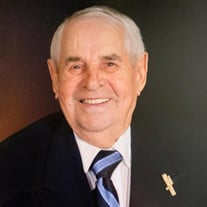 Henryk Malinowski, 95, of Lutz, Florida, beloved husband for 70 years of Marianna (Oldziej) Malinowski, entered into eternal rest on Friday, November 6, 2020. He was born in Broniszewo, Poland, son of the late Jan and Anna Malinowski and immigrated to Hartford, Connecticut in 1966. Prior to his retirement and move to Lutz in 1986, he worked for Colt Firearms for over twenty years. He was a communicant of St. Mary Catholic Church and a member of the Polish American Social Club of Pasco County. He is survived by his wife and six loving children and their spouses; John and Christine Malinowski of Valrico, Elizabeth and Sebastian Trombatore of Round Rock, Texas, Jackie and Thaddeus Szymanski of Lutz, Mario Malinowski of Valrico, Betty and Victor DaCruz of Farmington, CT and Robert and Jessica Malinowski also of Lutz; Thirteen grandchildren and their spouses, Dorothy and Donny Welch, Betty and Derek Boszko, Joseph Trombatore and Marc Berman, Ann Marie Trombatore, Amy and Ross Bennett, Lisa and Michael Wiciak, Dan Szymanski and Holly Wolfrum, Ashley Zaworska, Chelsea and Parrish Castor, Ashley and Michael Scavotto, Allison DaCruz, Anthony Malinowski, and Jayden Malinowski; Twelve great grandchildren, Logan, Mya, Kaitlyn, Hailey, Lily, Lucas, Violet, Owen, Reid, Nora, Julian, and Warren. Henryk was a faithful husband, devoted father and loved God and his family above all. His greatest pride and joy were that his children were close to one another and called and visited him regularly. That meant the world to him. The family would like to express our deepest gratitude to Robin and her team at LifePath Hospice for all of the care and support provided to our beloved Dad during the final stage of his life, which allowed him to live out his final days in the comfort of his home, tended to lovingly by his wife and children. The funeral service will begin with a viewing at 9am at St. Mary Catholic Church, 15520 N Blvd. Tampa, FL 33613, followed by a Mass of Christian Burial at 10a.m. Burial will follow at Trinity Memorial Gardens, 12609 Memorial Drive, Trinity.

Henryk Malinowski, 95, of Lutz, Florida, beloved husband for 70 years of Marianna (Oldziej) Malinowski, entered into eternal rest on Friday, November 6, 2020. He was born in Broniszewo, Poland, son of the late Jan and Anna Malinowski and immigrated... View Obituary & Service Information

The family of Henryk Malinowski created this Life Tributes page to make it easy to share your memories.

Send flowers to the Malinowski family.