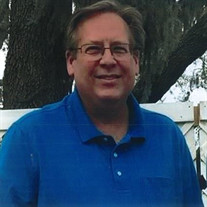 Harry A. Combs, 56, of Lutz, Florida, went Home to Jesus on June 6, 2018 in Clearwater. Harry was born in DuQuoin, Illinois to Bill and Norma Combs on May 13, 1962. On July 27, 1985 he married Phyllis Kilgore. He was a graduate of University of South Florida. He worked as an accountant in healthcare for 34 years, most recently, for BayCare Behavioral Health. Harry had a love of family, friends, his church and sports. He was a loyal fan (unless they were losing) of the St. Louis Cardinals, Denver Broncos and Florida Gators. Harry was highly involved in youth sports especially softball. He was preceded in death by his father, William R. Combs. Harry is survived by his wife, Phyllis Combs; children, Caleb (Stephanie) Combs of Clearwater, Florida, Kelsey (Kenny) Glesenkamp of Largo, Florida, his mother Norma Combs, brother Terry (Debbie) Combs and sister, Kathy Combs. He is also survived by his mother-in-law Jo Kilgore, brothers-in-law Kerry (Barb) Kilgore and Charles (Terri) Kilgore and nieces Jessica Canter, Brittany Nickerson, Caitlin Specht and Brianna Kilgore. A celebration of life service will be held on Saturday, June 16, at 11:00 a.m. at Generations Christian Church in Trinity, Florida. Guests attending are asked to dress casual and/or wear their favorite sport team apparel as this is what Harry would have preferred. Memorials may be given to the sports program at One Community Now or Johnson University Florida student scholarship fund.

The family of Harry Alan Combs created this Life Tributes page to make it easy to share your memories.

Send flowers to the Combs family.