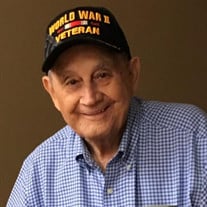 Frank A. Zaccaro October 5, 1925 – April 5, 2021 “Fair winds and a following sea.” Frank A. Zaccaro – a loyal and devoted husband, father, grandfather, brother, uncle, and friend peacefully passed away surrounded by family on Monday, April 5, 2021, in Spring Hill, Florida. He was 95 years old. Frank was born October 5, 1925, in Brooklyn, NY to Donato and Josephine Zaccaro. He was the baby of the family, having 7 older brothers and sisters who referred to him by his nickname “Tat”. He was drafted to serve in World War II when he requested to serve in the U.S. Navy as he had a brother in each of the other branches. He spoke of his time on the U.S.S. Oklahoma City with great pride, noting his ship was responsible for clearing the path for the eventual occupation of Japan during the war. He was one of the first servicemen to witness the devastation in both Hiroshima and Nagasaki after the war was over. Later in life, he orchestrated an annual reunion for his shipmates, which he attended each year. He enjoyed the ability to bring his shipmates together, traveling with them to different cities, sharing stories, and being a part of each other's lives and families. Frank didn’t just believe in the importance of family; he lived his life always putting family first. After losing his father at Age 7, he recognized the need to step up and help to take care of his mother. He got a job delivering newspapers and made artificial flowers to help bring in income for the household. In 1945, at just 19 years old, he married the love of his life, Frances Maietta Zaccaro. Together, they ensured their family understood the simple blessings of being together, celebrating holidays, enjoying music, traveling and experiencing the simple joy life stands to offer. There was no truer testimony to a faithful and lasting marriage. Married 72 years, Frank was by his dear “tweety pie’s” side until she was called home in February of 2017. Frank lived a life full of adventures and experiences. Building a career in selling woodworking machinery, he traveled the world, having been to every state two times and visiting countless countries. His greatest career move was in 1972 when he accepted a job with Holtz Machinery, became Vice‐President and frequently traveled to Europe. Frank was a man of faith and a dedicated parishioner at St. Thomas Aquinas in New Port Richey, FL. He and Frances enjoyed bible studies and breakfast at “Susie Too” with their friends. From a young age Frank was passionate about sports and was a die‐hard Brooklyn Dodgers fan. While Frank undoubtedly achieved great personal and professional success, he was best known for his accomplishments as a husband, father, and grandfather, better known as “G.” His legacy of kindness, generosity, and love will live far beyond him through his children, grandchildren, and greatgrandchildren. Frank was predeceased by his beloved wife of 72 years, Frances, their daughter Carmela “baby doll” and their oldest son Donald; he is survived by their children, Richard and wife Fran, and Robert and wife Rhonda. He was a beloved Grandfather to his 11 grandchildren; Donna, Audra, Donald Jr, Ann‐Marie, Barbara‐Ann, Frank, Melissa, Jennifer, Marissa, Lisa and Lauren, 17 great‐grandchildren, and 3 greatgreat- grandchildren.

The family of Frank A. Zaccaro created this Life Tributes page to make it easy to share your memories.

Send flowers to the Zaccaro family.