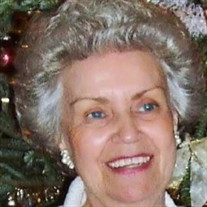 Evelyn Joy Smith Evers, 84, passed from this life on Saturday, May 7, 2022. She was a faithful Christian and has received her heavenly crown. She is now with the love of her life, Robert “Bob” Evers, who had passed just 10 weeks earlier. Born on July 22, 1937 in Lewisburg AL to Vollie Lester and Hattie Isabel James Smith, Joy was truly a Joy to all who had the pleasure of knowing her. She attended Phillips High School in Birmingham, AL. On August 11, 1954, she married Robert “Bob” Evers. Their union would create one of the most loving and happiest of families. Joy, along with Bob, taught her four daughters to love the Lord. She was a loving mother, a true nurturer who provided a love filled home despite having to overcome numerous obstacles that would have caused others to give up. Beautiful inside and out, Joy was the truest example of a hospitable, gentle and kind southern lady. Her home was always open to offer a meal, a piece of pie or a glass of sweet tea…really sweet tea. And you usually left with a bag of pecans. “Oma”, as she was known to her grandchildren and great-grandchildren, was a wonderful cook. No one could beat her fried okra. She had a talent of “activating” ribbons, bows, flowers and tin cans to make beautiful arrangements. And of course, everything had to have a tassel. She took many under her wings, offering words of wisdom and advise. Joy is survived by, daughters Cyrisse Hudson (Barry), Lou Alice Quick (Mike), Leianne Harden (Len) and Robin Perez (Danny), sister Jonnie Louise Leigeber, 10 grandchildren, 28 great grandchildren as well as nieces and nephews. She was preceded in death by her husband Robert Irving Evers, her mother and father Vollie and Hattie James Smith, grandson Nicolas Vincent Perez and step-granddaughter Lisa Vallade. A private service for Joy will be held at a later date. The family requests any donations be made in her name to Autism or Alzheimer’s research.

Evelyn Joy Smith Evers, 84, passed from this life on Saturday, May 7, 2022. She was a faithful Christian and has received her heavenly crown. She is now with the love of her life, Robert &#8220;Bob&#8221; Evers, who had passed just 10 weeks... View Obituary & Service Information

The family of Evelyn Joy Smith Evers created this Life Tributes page to make it easy to share your memories.

Evelyn Joy Smith Evers, 84, passed from this life on Saturday,...