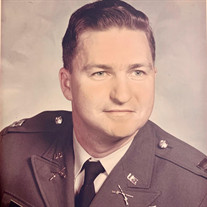 Eugene Talmadge Hand, better known by friends and family as Tal, was born November 8, 1934 to Henry and Nora Hand. He was the second eldest of 11 siblings. Tal grew up with his siblings on the family farm in Georgia where he learned the value of hard work. As a young adult, at the age of 14 years old Tal’s bright career path began, when he went to work at his first job at the pipe company. He later joined the Navy, worked for the Railway System, and then joined the Army. Simultaneously while in the Army, he went to school for 14 years and completed his Master’s Degree in English. In the Army Tal’s enthusiasm for flying developed and he soon thereafter became a Helicopter Pilot for, but not limited to, Reconnaissance Missions. During Tal’s 24 years of service he earned a number of awards notably the Distinguished Flying Cross, the National Defense Metal, the Silver Star for Vietnam Service, the Bronze Star for working with the Vietnamese, the Korea Service Metal, and on Tal’s Second Tour to Vietnam his helicopter was shot down earning him the Purple Heart Award. Tal was truly and deservedly a decorated war Hero. Although he sustained numerous injuries, and was even told he would never walk again by doctors, Tal’s inner strength showed through as he concurred the odds with his dedication, persistence, and hard work. After 3 months recovering and rehabilitating at the Washington hospital Tal was able to walk again. His injuries and time spent in service were not without considerable impact though as they were life altering causing him great physical pain and at times mental anguish for the remainder of his life. However even those closest to him would hardly see this side of him. Tal was a quiet and thoughtful man; his spirit and character would not be so easily broken as his bones had been. Additionally, with the love and support of his wife Jeanie and their children Jeffery and Lisa he gracefully persevered. Soon after Tal’s retirement from the army, their family was met with another tragedy though when Jeanie died due to complications brought on by illness. Tal’s bravery and strength would carry him forward again as he grieved for his lost wife and continued to raise their adolescent children. He would not have to raise them alone for too long though as fate would come knocking. Well actually Tal went knocking, he was selling Life Insurance and on one of his outings he came across the beautiful Elise. She would a year later become his second wife, and in Tal’s own words his “best friend.” They lived happily but not without obstacles as raising teenagers can be a handful. Elise had 3 slightly older daughters from her previous marriage Bonnie, Susan, and Lori. In their late teens and twenties, they did not live with them long if at all, but they did embrace Tal early on as their Stepfather. Tal was an honorable and respectful man, as well as loving and doting father, and a wonderful husband. His achievements and life with Elise would continue to prosper, blossom, and grow in love. Right before Tal met Elise, he had started the process for owning and operating his own vending machine business and by the time they were married he was officially a business owner. A few years later he was a Tax Advisor for H&R Block and then once all the children were out of the nest Tal and Elise moved from Enterprise, AL to Florida. After they moved, Tal worked for 5 years as a National Service Officer for the Disabled American Veterans, helping Veterans to obtain the medical support they were due. Then he retired and Tal and Elise settled into their house in Land O Lakes, FL. For the last few months of his time here on Earth Tal was living full-time at the Baldomero Lopez Veterans State Nursing Home where Tal as well as family received great care and support. The family is so thankful to the nurses and volunteers at the facility, and the absolutely amazing Hospice staff and Chaplin that would visit Tal each week. Tal precedes his wife Elise, his children Bonnie, Susan, Lori, Lisa, & Jeffery, his grandchildren Marcy, Little Elise, Nathan, & Justin, his great grandchildren Sariah, Abigail, & Evelyn, and those married into the family Butch, Bonnie, & Stasha. Throughout their marriage, Tal and Elise went on several adventurous trips around the United States and to Germany to visit Elise’s family. Those fond memories as well many others of the brave, strong, honorable, fun, beautiful blue-eyed man we lovingly call “Tal” are the memories we will all hold on to now in his absence. Though he is not with us in the flesh, his spirit is with us in our hearts and in our memories. Let’s all be encouraged when gathering to enjoy in our shared memories of Tal together. He was a very special, unique, and multi-talented man. He will always be very loved by his family and friends and will be missed deeply. Until we meet again. Love you Tal! The family is so appreciative of the care Tal received from the Hospice Team, that we ask rather than sending flowers if you would like to show your support please instead make a donation to http://www.hospicesect.org/. Thank you.

Eugene Talmadge Hand, better known by friends and family as Tal, was born November 8, 1934 to Henry and Nora Hand. He was the second eldest of 11 siblings. Tal grew up with his siblings on the family farm in Georgia where he learned the value... View Obituary & Service Information

The family of Eugene T. Hand created this Life Tributes page to make it easy to share your memories.

Send flowers to the Hand family.