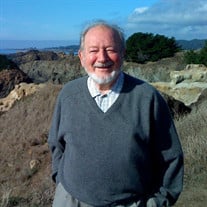 Our beloved husband, father, “dad”, pioneer and dearest friend, left this earth on Tuesday, February 2, 2021 at 2:02pm EST. He was surrounded by his family, holding his hands and comforting him as he took his last breath. His energy continues to brighten us as he lays the groundwork for when we all shall meet again. He is survived by his devoted wife of 63 years Ingrid, their three children, Jörg (Joerg), Jens and Birgit, his beloved dog Toby, an incredibly long-line of family members in Germany, and countless friends here in the United States and abroad. He truly was a pioneer - a self-made man. He lost both parents at a very young age, raised by an aunt and uncle. An engineer by trade and for the love of his family, he made the difficult decision to leave his extended family in Germany in 1966 to start the U.S. division of Wotan Machine Tools (part of Wotan Werks) in the United States. They settled in Iselin, New Jersey (NJ) for a time, ultimately residing in Edison, NJ for quite a number of years before building a brand new home and life for his family in the more rural town of Oak Ridge, NJ. He found a bit of solace and a small slice of his beloved birthplace of Barntrup, Germany in that town...nestled in the forested hills of northern New Jersey. Professionally, he was an invaluable engineer, traveling the globe servicing the engineering needs of some of the world’s largest manufacturing giants for Wotan Machine Tools. But when Wotan Machine Tools was acquired by Pratt & Whitney and subsequently filed for bankruptcy in 1990, Ernst Schlueter formed a partnership with longtime friend and colleague Gunther Hiss. They formed H&S Machine Tools, a successful engineering parts and service organization that was specifically created to support the hundreds of aerospace and manufacturing giants who owned Wotan machinery. Never one to conform to standards and always pushing himself, he decided to retire in 2002 at the age of 71. Upon retirement, ever the family man, he relocated with his wife Ingrid to New Port Richey, FL, to be closer to his eldest son Joerg, and his youngest Birgit, who both reside in the area. Personally, Ernst will be remembered as a family man, supporting his loving wife and the many adventures his children would embark-upon until his passing. He was an outdoor enthusiast that loved nature and the comfort that a canopy of trees could provide him during long walks with his wife. He was an avid fisherman, which dates back to his father Heinrich - he used to fish for salmon along the shores of Norway. He passed that love of fishing on to his sons. Among the many memories from his bucket-list, his first trip to Alaska with his eldest son Joerg was one that stood out, as he said the landscape reminded him of his beautiful homeland. His son Jens recalls him as a consummate gardener, teaching his children the value of what the earth provides and the proper way to create a garden, plant trees, and nourish seeds to grow. He extended his extensive knowledge of engineering in everything his children did: from gardening; to mechanics; to design - and most importantly the general importance of learning and proper discipline in life. While other children played games or watched television, Ernst’s children learned mechanics, engineered massive rock walls along the hillsides of his property, created complex vegetable gardens that produced an abundance of fruits and vegetables, planted endless forests of trees, and fervently enrolled them in german school on weekends, to pass-on the importance of their german culture and language skills. While unpopular at the time, his children were more than grateful for those experiences as they became adults - appreciating the sacrifices made for their futures. His german heritage and incredible work ethic were always important to him, and equally if not more important, that it be passed-on to his children. The countless memories and experiences he shared with his family will never be forgotten. He was unfortunately taken from this world just shy of his 90th birthday, after having been ravaged by Covid 19, quickly followed by pneumonia stemming from his weakened lungs. Ernst-Wilhelm...we love you dearly. We’ll see you again... Per his wishes, there will be no memorial service and his ashes will be laid to rest in the forest overlooking his birthplace.

Our beloved husband, father, &#8220;dad&#8221;, pioneer and dearest friend, left this earth on Tuesday, February 2, 2021 at 2:02pm EST. He was surrounded by his family, holding his hands and comforting him as he took his last breath. His energy... View Obituary & Service Information

The family of Ernst Wilhelm Schlueter created this Life Tributes page to make it easy to share your memories.

Send flowers to the Schlueter family.