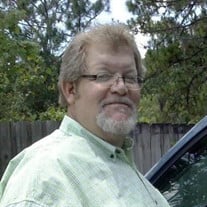 Emanuel “Mooch” Blake, III, 60, of Odessa, Florida, joined the church triumphant on Friday, December 3, 2021 at 6:26 am, at St. Joseph’s Hospital North. Manny was born August 17, 1961 in Chillicothe, Ohio to the late Manuel “Pepsi” Blake, Jr. and Frances Louise Johnson Price. He is survived by his wife, Sonja Fitts Blake; his daughters, Gretchen (Jason) Martin, Candise, and Brandica; and his five grandchildren; Noah, Levi, Damian, Kerry, and Raven; his siblings, Robert, Randy (Patricia), Starla Blake Easterday, Ronnie (Kathy); step-sisters Marla Rounsley, Rebecca (Ronnie) Wagner and those he loved as his own, Kaylie, Nicole, Raelynn, Jonah, Mya, Lillian, Riley and Gauge, as well as countless other family members. He was preceded in death by siblings, Ricky Blake and Robin Blake Butterbaugh. Manny retired from the US Army and the Ohio State Department of Corrections. In 1994, he served as Commander of the American Legion Post 62 in Chillicothe, Ohio as well as in the Color Honor Guard. He was a lifetime member of American Legion Post 62 and Amvets Post 4. He attended Grace Family Church in Lutz, Florida. He threw darts competitively and he loved family more than life itself. To a man where family were friends and friends were family, the number of those that will love and miss you can never be fully counted. Sonja Fitts Blake

The family of Emanuel Blake III created this Life Tributes page to make it easy to share your memories.

Send flowers to the Blake family.