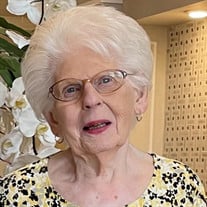 Eleanor Marie Korchak, 93, died peacefully on September 22, 2021 in Florida and is now in the arms of her loving savior. Guided by her Catholic faith, Eleanor lived a full and abundant life and gave her heart to her family and devoted friends in everything she did. As a deeply spiritual woman, Eleanor was always a shining example of living according to the will of God. Born on February 21, 1928 in Scranton, PA, she was the daughter of the late John J. Matakas and Josephine (Peredney) Matakas, who both came to the United States from Lithuania in the early 1900s. She was the youngest of eight children, predeceased by her siblings Ann Greblick, Margaret Matas, Helen Urdanick, Jack Egan, William (Bill) Matakas, Mary Egan, and Anna Egan. As a child growing-up during the Great Depression, Eleanor often shared her wisdom and unique perspective for all around her to learn. When her family moved from Scranton to Binghamton in 1933 following her father's career working in the coal mines, little did Eleanor know that Binghamton would be a place she would call home for more than 79 years, and meet the love of her life. As a child and young adult, Eleanor enjoyed singing and was regarded as having a beautiful singing voice. She graduated from Binghamton Central High School in 1947 and immediately began working for the New York Telephone Company as a switchboard operator. Shortly afterward, Eleanor met her loving late husband, Joseph F. Korchak, at a social gathering with friends, and the two were married on July 2, 1949. Their marriage blessed them with two children - Karen (Kuna) Korchak and Robert Korchak, along with their spouses, the late Dean Kuna, and Jeanne Korchak; four grandchildren - Erik Kuna and wife Kristy, Kristyne (Kuna) Walsingham and husband Brian, Jennifer (Korchak) Krajewski and husband Eric, and Emily Korchak; and six great grandchildren – Bryce and Blake (Walsingham), Keri (Kuna), Jayden (Korchak), and Gabriella and Madelynn (Krajewski). Eleanor enjoyed a successful career, beginning work at Harper's College in 1961, which later became the State University of New York at Binghamton. In her 27-year tenure at the state college, Eleanor was able to make an impact in the lives of students and employees through her work in the Civil Service Employee Association (CSEA). She became president of the CSEA Binghamton Chapter, regularly traveling to meetings at the state capitol, among other activities. One of her most illustrious accomplishments that she proudly shares is when she spoke on the State Senate floor to fight for the rights of state employees. In a time where there were no laws to protect workers and ensure fair treatment, Eleanor was a relentless advocate. Eleanor was an active member of St. Thomas Aquinas Church, along with St. Patrick's Church. Faith was the driving force that got her through the sudden death of her late husband in 1985. From this tragic event, Eleanor was faced with having to learn a sense of independence and was carried through by her spiritual leaders, family and devoted friends. Following the death of her husband, Eleanor prided herself on being active and social. She retired in 1988 and became involved with numerous activities at church and was a member of the Friends of the Library. She enjoyed traveling with her friends and had standing outings on Fridays for "movie and pizza with the girls." In 2012, Eleanor made the move to Florida to be closer to the Florida sunshine, and to be near her daughter, Karen, and grandchildren and great grandchildren. She was determined to remain active, taking part in Bunco and continuing with her busy social calendar. In her final years, she was able to live with her daughter at the Retreat at Trinity in Florida. Eleanor will be remembered for always being put together, usually with her favorite string of pearls on, and having her hair done and lipstick applied, a craft that she mastered without ever needing a mirror. She was a lover of all things chocolate, Italian food, and chicken salad. But the legacy that Eleanor wants to be remembered most by was her undying faith, even in the toughest and most uncertain of times. Her spirit will remain with everyone she touched in her beautiful 93 years of life through her constant prayer scripted in every card written to her children, grandchildren and great grandchildren, “May God continue to protect you and keep you in his loving care.” Eleanor’s life will be celebrated with a visitation, service and reception on Saturday, October 23, starting at 12:00 pm at Trinity Memorial Gardens, 12609 Memorial Dr., Trinity, FL. The service will begin at 1:00 pm, with a reception to follow. Eleanor will be laid to rest at Calvary Cemetery & Mausoleum, Johnson City, beside her devoted husband, Joseph, on Friday, Nov. 5. The burial service will begin at 11:00 am at JA McCormack Sons Funeral Home, 141 Main St., Binghamton, NY, with the burial at Calvary Cemetery & Mausoleum, 501 Fairview St., Johnson City, NY, to immediately follow. In lieu of flowers, the family requests donations be made to honor the legacy of Eleanor Korchak to Mercy House of the Southern Tier (online: mercyhousesoutherntier.com/donate.html; or by mail to Mercy House, 212 North McKinley Avenue, Endicott, NY 13760).

Eleanor Marie Korchak, 93, died peacefully on September 22, 2021 in Florida and is now in the arms of her loving savior. Guided by her Catholic faith, Eleanor lived a full and abundant life and gave her heart to her family and devoted friends... View Obituary & Service Information

The family of Eleanor M. Korchak created this Life Tributes page to make it easy to share your memories.

Send flowers to the Korchak family.