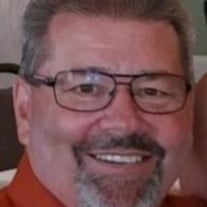 Dennis J. Ithal, 63, passed away on June 30th, 2020 at his home in Kissimmee, Florida after a long, courageous battle with Cancer, surrounded by his family. Dennis was born March 16, 1957 in Oak Park, Illinois to Carl and Rosalie Ithal. Dennis loved golf. In 1977 he took his hobby of golf and used it as part of his rehabilitation after losing his arm in a work accident. He actively participated in many Amputee organizations. He went on to compete in the National Amputee Golf Association Tournaments as well as the North American One Arm Golf Association. He has competed both as a one-armed golfer as well as using a prosthetic attachment. He has taken first place in both categories over the years. Dennis was an Air Traffic Controller in Aurora, Illinois for over 25 years. He retired in 2007 as a Supervisor at the facility. He then went on to teach Air Traffic Management at the Mike Monroney Aeronautical Center in Oklahoma City, Oklahoma. After a few years in Oklahoma he moved to Washington D.C. and retired once again in 2012 working for TetraTech as a consultant on various national programs for the FAA. Dennis is survived by his wife of 12 years, Debra (Wolf) Ithal; daughter, Brianne (Douglas) Sanders, sons, Carl (Trisha) Ithal, James (Katie) Ithal, stepson, Craig (Karen) Schindler; brothers and sisters, Michael (Karen) Ithal, Mary Jo (Jeff) Sevenich, John (Jeri) Ithal, Susan (Todd) Pemberton, Dexter (Sandra) Ithal; numerous grandchildren, nieces, nephews and cousins. He was preceded in death by his brothers, Andrew Ithal and Gregory Ithal; step daughter, Cortney Schindler, parents and grandparents. Dennis was a very forgiving, caring, loving husband and father and great man. He was very proud of his family and the way his children and siblings became the persons that they are today. He will be incredibly missed by many people because in his lifetime he touched so many. Arrangements are with the Trinity Memorial Gardens, 12609 Memorial Dr. Trinity, Florida 34655. Visitation July 9th, 2020 from 1:00 pm– 3:00 pm

Dennis J. Ithal, 63, passed away on June 30th, 2020 at his home in Kissimmee, Florida after a long, courageous battle with Cancer, surrounded by his family. Dennis was born March 16, 1957 in Oak Park, Illinois to Carl and Rosalie Ithal. Dennis... View Obituary & Service Information

The family of Dennis Joseph Ithal created this Life Tributes page to make it easy to share your memories.

Send flowers to the Ithal family.