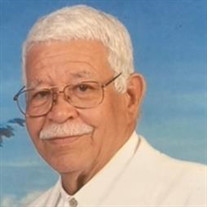 A Livestream of the funeral service can be found here: https://youtu.be/99Qfd2SM5mk On Wednesday, March 16, 2022 at 7:25 p.m. David Livingstone Van Gurp at the age of 84 passed away peacefully of natural manner of passing due to CHF, COPD, and end stage peripheral vascular disease at the Adventhealth Care Center South leaving this world as he knew it and went to his eternal home in Heaven where he will live forever with his Lord and Savior, Jesus Christ, who he loved with all his heart. He left us with his favorite words from the scriptures, “let not your heart be troubled”. David (Pop) was born in Phillipsburg Sint Maarten on August 14, 1937, to Ethel Mathilda Lake Van Gurp and John Henry Adolphus Van Gurp. He lived in Curacao, and it was there that he met his wife, Sybil. They moved to Aruba in 1958 and on May 16, 1960, Sybil and her two children, Jerome and Alberto, married David Van Gurp. David and Sybil expanded their family by giving birth to two additional children, Margie, and Henry. In 1968 they moved to St. Croix, U.S. Virgin Islands where they lived until October 14, 2017 when Hurricane Maria hit St. Croix and destroyed a large portion of the island. At that time David and Sybil moved to Tampa, Florida to live with their son and daughter-in-law, Jerome and America Van Gurp. Hon, Pop, Grandpa, Brother Dave, and Mr. Van Gurp was some of the affectionate and respectful names that David Van Gurp would answer to. Hon is what his wife Sybil called him. She was the light of his life; a life of 59 years that they shared together before her passing in June of 2019. If you were to ask David what his greatest accomplishments were in life he would tell you that it was his dearly beloved wife Sybil and their children. Pop was the name given to him by his children. They always knew that if they needed anything, especially his wisdom and guidance in solving their problems that Pop was always there. Grandpa was the name given to him by his grandchildren who he loved dearly and they certainly knew that if they needed anything at all he was always there for them with an open ear and a loving heart. His children would tell you that Pop’s family was the most important thing in life to him. Mr. Van Gurp was the name he was called by his staff, co-workers, and company executives who admired, respected, and praised him for his work ethic and solutions for the 35+ years he worked in the Hess Oil Refinery in St. Croix, virgin Islands. To this day he is still popular and admired by those that still work there after his retirement in 2004. Mr. David Van Gurp was known as a good man who was a very dedicated and hard worker . He did it all with a spirit of excellence. He was known as a jack of all trades because if he heard of or saw a need that he could do something about he would do it. Such as, when he heard that there was no air conditioning in his granddaughter’s school he purchased fans for all the classrooms and if the neighbors’ cars would breakdown he would use his own money to fix them. Brother Dave was the name his church family in St. Croix would call him with respect and admiration for all his many hours of hard work that he devoted to the church. All the family found it very interesting that after Pop’s decision to follow Christ he suddenly became a singer. On some Sunday mornings you would find him on the pulpit encouraging the congregation through words from the scriptures and songs. Pop would spend hours fixing or building things at his church and his solutions showed he was a student of the MacGyver school of repair. Pop left us with these encouraging words from his favorite scripture. John 14:27 “Peace I leave with you, My peace I give to you; not as the world gives do I give to you. Let not your heart be troubled, neither let it be afraid.” He is survived by his brother Ambrose Van Gurp, sister Recilla (Cilla)Van Gurp, his four children, Jerome Van Gurp (America), Alberto Van Gurp (Erica), Margaret (Margie) Van Gurp, Henry Van Gurp (Lisah Vanburen); nine grandchildren, Jaime Parrilla (Josue), Delicia Van Gurp Brodhead (Blake Brodhead), Alberto (Ali) Van Gurp. Jr., Carlos Van Gurp, Daniel Coleman, Courtney Coleman, Myles Marshall, Monikah Marshall, Kenya Marshall, and three great grandchildren, Brixton Brodhead, Ja’melia Parrilla and Brianna Marshall. The Van Gurp family would like to take this opportunity to thank, Adventhealth Care Center South, Lifepath Hospice, citylife church, and Trinity Memorial Gardens for the love and support given to our family through the passing of our loved one, David (pop) Van Gurp. May God bless you for the blessing you have been to us.

A Livestream of the funeral service can be found here: https://youtu.be/99Qfd2SM5mk On Wednesday, March 16, 2022 at 7:25 p.m. David Livingstone Van Gurp at the age of 84 passed away peacefully of natural manner of passing due to CHF, COPD,... View Obituary & Service Information

The family of David Livingstone Van Gurp created this Life Tributes page to make it easy to share your memories.

A Livestream of the funeral service can be found here: https://youtu.be/99Qfd2SM5mk