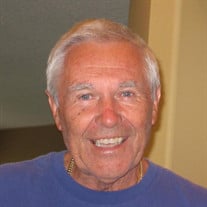 David Charles Frook, 82, of Odessa, FL, died peacefully at his home on January 28, 2021. David was born January 18, 1939 in Fond du Lac, WI to Walter and Alice (Orth) Frook. He graduated from Goodrich Senior High School, Fond du Lac, WI in 1957 and went on to attend the University of Wisconsin - Oshkosh, studying History and English. David married his high school sweetheart, Joyita “Joy” Tagliapietra, in Fond du Lac in 1960. He served 6 years with the Wisconsin National Guard (32nd Infantry Division) during the early years of his lifelong career in the sales and marketing industry. David had many interests, one of which was collecting classic cars, and was the proud recipient of many show awards. He was a jazz and blues music aficionado who enjoyed an extensive album collection. He loved to travel the world and was an avid reader and beachgoer. He was a long-time volunteer at St. Timothy’s and was a member of the Men’s Club. His greatest passion was being with family and friends, telling never-ending stories and jokes. He is survived by his wife, Joy, two sons, Tony (Martha) and Dave (Ronda), and daughter Tina Smith (Jay); seven grandchildren, Anthony, Alec, Vanessa, David (Jess), Ryan, Lauren and Amanda Smith; two great grandchildren, Jase and Easton; sister JoAnn (Jerry) Hohler; and many in-laws, nieces, and nephews. David was preceded in death by his parents, Walter and Alice Frook. A funeral mass will be held at St. Timothy Catholic Church in Lutz, FL on Tuesday, February 9 at 11:00 am. Live streaming of the Mass will be available for those unable to attend. https://sainttims.org In lieu of flowers, you are welcome to make a donation to St. Timothy Catholic Church or the charity of your choice.

The family of David C. Frook created this Life Tributes page to make it easy to share your memories.

David Charles Frook, 82, of Odessa, FL, died peacefully at his...

Send flowers to the Frook family.