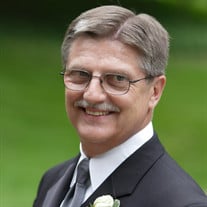 Daryl Frank Pokrana, 71, passed away at home peacefully surrounded by family on Wednesday December 23, 2020. Born October 27, 1949 in Chicago, Illinois, he was the only child of Violet (Kalita) and Frank Pokrana. Daryl received his primary education and made many lifelong friends at St. Ferdinand Elementary School. After graduating from St. Patrick’s High School in 1967 he continued his higher education at Northern Illinois University and received a Bachelor of Science degree in 1971. After college, Daryl earned a CPA and first worked as an accountant for JCPenney. He later worked for the City of Niles Parks and Rec, DeKalb County, the City of Hallandale, and Southwest Florida Water Management District. All those he worked with were considered friends as much as colleagues. In 1973, Daryl traveled to Indianapolis for work with JCPenney. As he walked through the door, Daryl spotted Cynthia D. Bright and so began the next chapter of his life with her by his side. One year later they were married. Their loving union produced his most cherished achievements – their five children, each one “his favorite”. Most conversations with Daryl included reference to one or more of his children. He was beyond proud of each of them. Daryl was a great provider for his family and cherished family time. He found much joy being involved in their many school and athletic activities, family vacations, dinners out, and especially making them homemade pizza. He will be missed by his many lifelong friends, who he enjoyed golfing, hunting, or just chatting over a cup of coffee. His unique sense of humor and contagious laugh will be etched in everyone’s memories. He is survived by his forever love Cindi, his five children Christopher (Lani), Jennifer (Tim), Kim, Katie (Tyrell), and Jonathan, his 11 grandchildren Zoe, Addie, Gino, Samuel, Emerson, Charlie, Ansleigh, Everett, Elowen, Nathaniel, and Frankie, and many in-laws, cousins, nieces, nephews, and friends. He was preceded in death by his mother Violet (Kalita) Pokrana and father Frank Pokrana. Thank you to all our family and friends that prayed and supported us during his final chapter with Frontotemporal Dementia. We can never fully express our sincere appreciation and gratitude for all the ways in which each of you lifted our spirits during this time. We will miss his physical presence yet hold his spirit, as well as the memories of his smile and the sound of his laugh, in our hearts always. In lieu of flowers, the family asks that you consider a donation to the Association for Frontotemporal Degeneration at https://www.theaftd.org/support-aftds-mission/. Visitation will be held 1:00 - 3:00 PM (EST) on Wednesday, December 30th at Trinity Memorial Gardens, 12609 Memorial Drive, Trinity, FL 34655. The service that follows will be limited to family due to family members that are immunocompromised. We invite those interested to attend the service remotely via live stream on Facebook.

Daryl Frank Pokrana, 71, passed away at home peacefully surrounded by family on Wednesday December 23, 2020. Born October 27, 1949 in Chicago, Illinois, he was the only child of Violet (Kalita) and Frank Pokrana. Daryl received his primary education... View Obituary & Service Information

The family of Daryl F. Pokrana created this Life Tributes page to make it easy to share your memories.

Send flowers to the Pokrana family.